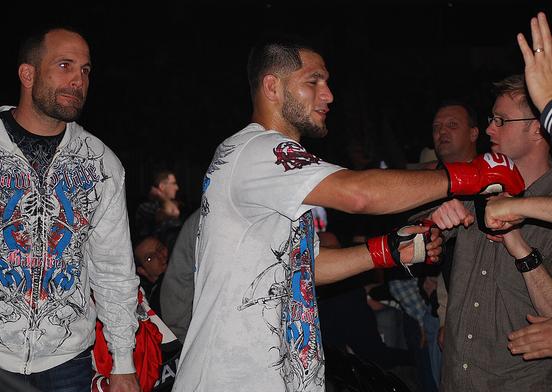 UFC officials have announced that a visa issue has prevented Reza Madadi from being able to compete in his UFC on FOX 8 bout against Michael Chiesa. Strikeforce veteran Jorge Masvidal has agreed to replace Madadi and fight Michael Chiesa on the card.

UFC on FOX 8 will take place on July 27 at the KeyArena in Seattle, Washington, and will be headlined by the UFC flyweight title fight between champion Demetrious Johnson and challenger John Moraga.

Chiesa (9-0) made his official UFC debut with a second round submission win against Anton Kuivanen at UFC 157 after winning “The Ultimate Fighter” contract in June 2012.

Masvidal (24-7) made his successful UFC debut with a unanimous decision win against Tim Means at UFC on FOX 7 event in April. Masvidal was a former Strikeforce lightweight title challenger, losing to then champion Gilbert Melendez via unanimous decision in December 2011.

The main card match-ups include:

The preliminary card match-ups include:

1 thought on “Madadi out, Jorge Masvidal vs. Michael Chiesa set for UFC on FOX 8 in Seattle”