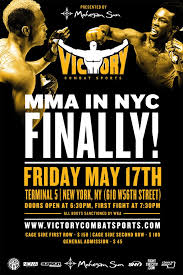 Lillis and Blair formed the sports marketing and production after nearly two decades of focusing on muay thai at their popular Friday Night Fights (www.fridaynightfights.com) events. However, they wanted to expand into MMA with Victory Combat Sports.

“We’re looking to try something new with Victory Combat Sports,” says Lillis. “Our intention is to take it slow and grow organically. We want our fighters and fans to know that they are a part of something special in the MMA world, and we recognize that this is a marathon, not a sprint.”

When asked how these events will be the first legally sanctioned fight card in New York when it’s still technically illegal the two told ProMMAnow.com:

“These are technically amateur fights but are the first sanctioned fights by a New York recognized organization: World Kickboxing Association. We were  hoping to include professional bouts but once again legislation did not pass the bill. We will however be inviting Cuomo to join us since he has softened to the sport .”

Victory Combat Sports will be focsued primarily in the Northeast market and will officially kick things off May 17th by hosting back-to-back MMA events in New York and Boston. The excitement will begin May 17th at Terminal 5 in New York City, followed by a second night of prizefights on May 18th at the Dorchester Armory in Boston, MA. All weight classes will be represented, and men and women will be fighting on both nights.

The May 18th show’s main event brings UFC veteran- Massachusetts’ Jon Manley (7-2) from Team Link returning to fight in his home state for the first time in over four years as he squares off against Mike Winters (7-2) out of Bombsquad in Ithaca, NY. The co-main event is a rematch as Lee Metcalf (6-6) from South Shore sport Fighting looks for revenge against Rodrigo Almeida from Wai Kru in Boston. The feature bout will Tateki Matsuda (8-3) from Sityodtong gym in Boston matching up with Ruben “Rukus” Rey  (6-5) from New England Combat in Providence.