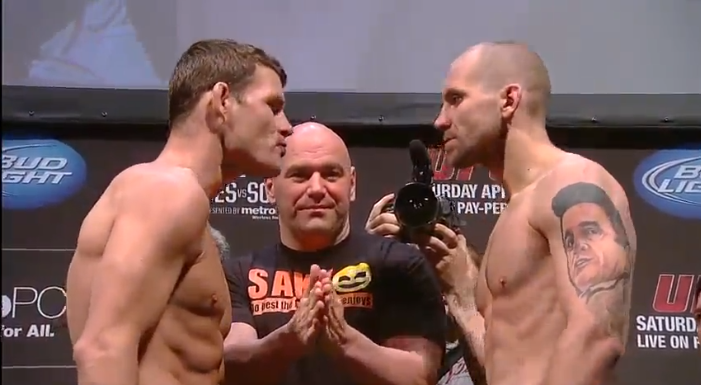 Michael Bisping backed up the war of words, dominating Alan Belcher over most of three rounds. Unfortunately, the fight was stopped due to an incidental eye poke, as Bisping’s finger found the eye Belcher, forcing a stoppage of the bout. Bisping was awarded a technical decision with scores of 30-27, 30-27, and 29-28.

Alan Belcher came out aggressive, throwing kicks and pushing the pace early. Bisping then took the center of the cage and went to work with his jab while scoring with his leg kicks as well. Belcher showed very nice footwork as both guys looked to score with a sustained attack. Bisping began scoring with his counter game, landing with his right hand off the kicks of Belcher as a very close first round came to an end.

Belcher opened the second pressuring Bisping, but Bisping’s jab landed flush, as did his right hand over the top as he again took the center of the octagon. Bisping then scored with a high kick followed by a left as he continued to stalk Belcher, then proceeded to string together combinations as the round wore on. Belcher responded firing off his jab, but it was more of a one-and-done attack compared to the multiple strike combinations of Bisping. Belcher’s corner screamed for something dynamic and he responded in part, landing several powerful right hands, but the round clearly belonged to Bisping.

Bisping resumed his attack to start the third, landing with multiple punch combinations again as Belcher continued to struggle with his range and rhythm. Bisping opened up with body shots, mixing in his kicks and continuing to score with his jab as Belcher failed to respond with more than anything other than isolated attacks as time wound down on the bout. Bisping’s relentless attack forced Belcher to shoot for a takedown, which was easily shrugged off. An incidental eye poke would put a quick end to the bout however, as Bisping’s finger found the surgically repaired right eye of Belcher.