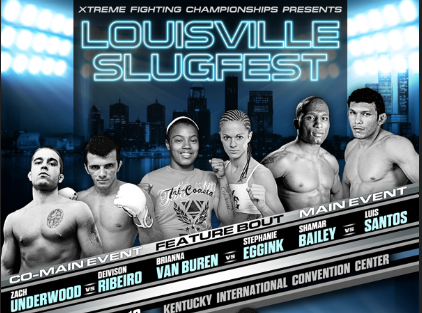 The card features an undercard made up of rising regional mixed martial arts talent from Kentucky and the surrounding states. And in the lone women’s MMA bout on the card, Stephanie “Snowflake” Eggink (2-1) returns to the XFC cage to take on Brianna Van Buren (1-0).

Michael “The Voice” Schiavello and Pat Miletich will be calling the night’s fights on AXStv. ProMMAnow.com (www.prommanow.com) will provide LIVE results throughout the evening and play-by-play commentary of the main card bouts.

Round 1 – Touch gloves. Leg kick from Stanford. Again. Right hand. Inside leg kick. Right hook. Leg kick. Right hand counter from Ferguson, backs Standford to the cage and unloads about 17 punches and uppercuts until he goes down and referee Gary Copeland stops it. It took him a few moments to get going, but once Ferguson let his hands go, there was not much Stanford was able to offer in the way of resistance.

Round 1 – Touch gloves. Leg kick from Troyer. Gallegos with a left hook. Right hook from Troyer and they both swing for the fences in the pocket, but mostly missing. The clinch up and Gallegos pushes him to the cage. Knee from Troyer. Gallegos unleashes a big punch combo, landing bombs. Troyer somehow hangs tough. This guy has a remarkable chin. His mouthpiece got knocked out in the middle there and the ref casually hands it back to him, he puts it in and they go back to throwing down. Gallegos getting the better of this slugfest so far. Somehow Troyer’s chin holds up and begins firing back with punches and a leg kick, then a body kick. Nice left from Gallegos. Left jab snaps Troyer’s head back and he fires off a right left, rocks Gallegos, grabs a Thai plum and lands a big knee to Gallegos’ face. Gallegos pushes him to the corner, backs up and lands four nice punches. Troyer fires back with a combo of his own. Big right from Gallegos, then two more to end the round. Country boys can survive my God! PMN has it 10-9 for Gallegos.

Round 2 – Touch gloves. Body shot from Gallegos. Left right from Gallegos. Left jab. Right hand. Thai plum and knee from Troyer but eats a counter punch. Gallegos starts landing more big shots, he hurts him and Troyer wobbles, finally crumbling to the ground as Gallegos finishes him off. Referee Gary Copeland stops the thrashing. Troyer may have lost about 5 years off his life in that bout.

Round 1 – Diehl comes out of Team Curran. Moell flashing a jab. Leg kick from Diehl. Moell shoots, eats a takes a knee that cuts him. He shoots again, presses Diehl to the cage, dripping blood, Diehl is defending but Moell puts him down . Diehl on his back with full guard, blood everywhere. Diehl with a closed guard, keeping Moell close. He gets to his feet but Moell double legs him right back to the ground. Moell pushes his head to the cage. Diehl gets to his feet as Moell holds one leg. Diehl holds his neck, not sure if it’s too tight or what but Moell drops to his back pulling guard. Now working from mission control, using a high guard and dropping elbows to the top of Diehl’s head. Ref stands them up. Front kick from Moell. PMN has it 10-9 Moell.

Round 2 – Moell circling. Leg kick from Diehl. Overhand right and a single leg takedown from Moell, but he moves to the wrong side of the body which allows Diehl to catch him in a guillotine choke and this fight is over as Moell taps out. Diehl evens up his record to 4-4 and teammate Felice Herrig loses her mind cageside.

Round 1 – Van Buren quite a bit shorter at 4’11” – only 19-years-old. Leg kick Van Buren. Again. She catches a kick and puts Eggink on her back. High guard with elbows off her back. Eggink locks on an armbar but Van Buren slams her way out. Eggink still holding her close, takes a couple short rights from Van Buren. Egging with wrist control. Van Buren stands up, kicks the legs of Eggink. Eggink springs to her feet. Van Buren pushes her to the cage. Knee to thigh from Van Buren. Elbow to the thigh from Van Buren with just over a minute to go in the round. A little dirty boxing from Eggink as Van Buren controls her against the cage. Ref separates them. Eggink comes out swinging but Van Buren clinches and puts her against the cage. PMN has it 10-9 for Van Buren.

Round 2 – Leg kick Van Buren, then a left hand. She presses Eggink to the cage, knee to thigh. Knees to the other thigh now. This is a tough little girl. Eggink turns her around, knee to the body, another, they wrestle in the clinch, jockeying for position. Elbow from Eggink. Ref separates them. Left hand from Eggink. Front kick from Van Buren, side kick. Eggink working the jab, then a one two. Just over a minute to go and they clinch against the cage where they trade knees. Van Buren turns her around. Drops levels and as Eggink tries to get on her back Van Buren slams her down. Eggink locks on a triangle, it’s very tight but somehow Van Buren survives and gets free before the bell. PMN sees it 10-9 for Eggink.

Round 3 – Left jabs from Eggink, left right. Nice left from Van Buren, then she times a nice takedown. Van Buren on top in half guard looking for the mount. She gets it. Eggink rolls out the back but Van Buren locks up an armbar. Eggink on top now as she pulls out of the armbar, she postures up as Van Buren tries to sit up.  Van Buren gets to her feet but Eggink trips her back to the ground and jumps on her back, locks in one hook. Van Buren stands up with Eggink on her back and tries to slam her off but to no avail. Eggink rolls her over, gets both hooks in now and looking for the choke with under a minute to go. Eggink softening her up with punches. They roll. Eggink dropping punches to take the round and likely the fight. Keep an eye on Van Buren. She took this fight on short notice and at 19 years old, she has a ton of potential. Very impressive. PMN sees the round 10-9 and the fight 29-28 for Eggink.

Round 1 – Underwood presses Ribeiro to the cage after walking through his punches. Knee to thighs from Underwood, goes for a trip. Carina Damm in Ribeiro’s corner shouting instruction. Now I wish I was there. Ribeiro muscles Underwood to his knees but he’s right back up landing knees to the thighs and finally trips Ribeiro. Underwood on top inside his full guard. Ribeiro locks on a guillotine catching Underwood wit his head to the side. Ribeiro resets it. Body shots from Underwood, he finally pops his head out and works the ground and pound. Underwood fighting to keep Ribeiro on his back. Ribeiro gets his back to the cage, trying to inch his way up and he’s up. Underwood pressing him to the cage, landing body shots. Ribeiro goes for a Thai clinch but Underwood drops levels and puts him back down. PMN sees it 10-9 for Underwood.

Round 3 – Underwood shoots in just in time to catch a knee. Underwood presses him to the cage, lands some knees to the thighs, drops levels. Ribeiro scrambles but ends up on his back with Underwood on top in half guard. Underwood working the ground and pound. Ribeiro almost gets a reversal, gets to his feet but Underwood drags him right back down. Ribeiro going for a kneebar, switches to a heel hook attempt with 2:00 to go. Underwood gets out and takes top control in half guard landing some right hands and working the ground and pound. Knee to the ribs from Underwood. Punches and elbows to the body. Ribeiro looking for a kimura with under a minute to go. Underwood still working on the body though and gets free of the kimura attempt, staying busy with knees and punches. PMN has it 10-9 and 30-27 for Underwood.

Round 1 – Sapo has an incredible 54-8 pro record. Shamar with a 15-8 record has his hands full here. Sapo is married to Carina Damm by the way. Leg kick from Sapo, gets Bailey looking low, Sapo lands a head kick, Bailey shoots, stuffed. Sapo with another high kick then a right hand and Bailey goes down. Sapo goes for the finish with punch after punch, blood everywhere, Bailey covering up, turtled up. Sapo tells the ref to stop it, but he’s giving Bailey every chance. Bailey is just overwhelmed, takes several more shots as he in pure defense mode. Finally, referee Gary Copeland stops it. It all started with that head kick.

One thought on “XFC 23 LIVE results and play-by-play”