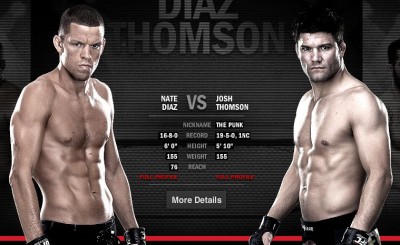 The UFC on FOX 7 main card will feature a lightweight bout between former number one contender Nate Diaz and former Strikeforce lightweight champion Josh Thomson. Thomson hasn’t fought in the UFC since 2004 when the UFC decided to cut their lightweight division at the time. It should be a good scrap, let’s see who should come out on top.

Josh Thomson (19-5, 1NC) is coming off a split loss to Gilbert Melendez for the Strikeforce lightweight title in May 2012. It was the third fight between the two fighters with Melendez winning two of three. Thomson is a veteran in the game with five wins via TKO/KO and nine wins via submission. He has only been finished once in his career, which is the headkick KO loss against Yves Edwards seen on many UFC highlight reels.

Nate Diaz (16-8) is coming off a loss while vying to become a champion as well. He was soundly defeated by Ben Henderson in his last outing at the UFC on FOX 5 event in December 2012. Diaz has won three fights via TKO/KO and 11 fights via submission. He is as tough as nails while being extremely long/rangy for the weight class.

This is an interesting fight on paper. Thomson is getting up there in age and has had a ton of injuries over the years, but does have the type of style that could give Diaz problems. Thomson hasn’t fought in almost a year which could be a factor, but it’s a three round fight and he’s incredibly difficult to finish as well.

This fight is going to come down the suspect takedown defense of Nate Diaz and/or the long layoff for Josh Thomson.

Thomson isn’t a great wrestler by any means, but he has had success in taking fighters down in the past. He was able to take down Gilbet Melendez multiple times in all three of their fights, and Melendez defends takedowns at a 71% clip. Nate Diaz only defends takedowns at a 46% clip. It’s true that Diaz is well versed in submissions on the ground, but Thomson has never been submitted in MMA and usually doesn’t take enough chances offensively to leave himself vulnerable to submissions while on the ground.

Nate Diaz will have a huge reach advantage in the striking department, but Thomson is the more accurate striker while having better defense according to Fightmetric. However, Diaz comes straight forward with volume strikes which makes it difficult for opponents to be effective while on the feet. If Diaz is able to come forward and get off offensively while defending takedowns he’ll win this fight hands down. However, if Thomson is able to take him down and avoid being submitted he can definitely pull off the upset.
[ads2]