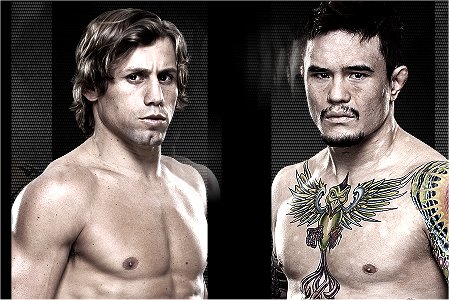 Urijah Faber showed a renewed energy in the octagon, taking out the very game Scott Jorgensen with a fight-ending rear naked choke at 3:16 of the fourth round.

Scott Jorgensen struck first with a leg kick to start, then fought off a Faber takedown attempt before getting a takedown of his own. The rest of the round was all Urijah Faber. Faber reversed position off the cage and secured an unorthodox takedown, taking his opponent’s back in the process. He then locked up a tight body triangle and threatened with multiple rear naked choke attempts, but Jorgensen was finally able to fight off the attempts and get to his feet. Faber then went to his patented guillotine and nearly finished the fight again. Jorgensen winced as the choke tightened, with Faber scrambling to a mounted guillotine. It looked like the tap may come, but Jorgensen hung tough and survived to see round two.

A groin strike from Faber halted the action just as it started to kick off in the second round. Jorgensen went to his jab after the restart, but Faber mixed up his strikes more effectively, landing to the body and alternating between punches and kicks. Jorgensen fired back with a big uppercut but Faber was more effective in landing combinations as the two continued to engage. Faber managed another takedown after ducking an overhand right from Jorgensen, but failed to keep Jorgensen grounded. A big exchange ensued, then a stall in the action on the cage wound down the second round.

Jorgensen got on track in the third, landing his stiff jab and controlling the distance early. Faber became a little more defensive but feinted level changes to score with his overhand right. Faber then started scoring to the body while Jorgensen continued to land his jab. Jorgensen shrugged off another takedown attempt and peppered Faber with combinations as the round wore on. Faber managed to secure a final takedown before the bell sounded on the third round.

Both fighters engaged to start the fourth, standing in the pocket and exchanging. Jorgensen strung together multiple-punch combinations and appeared to be taking control until Faber used a counter left hand to turn the tide. Jorgensen was then stuffed on a takedown attempt, but couldn’t stop the next attempt from Faber. Once on the ground Faber quickly took the back of Jorgensen and locked up the fight-ending rear naked choke. The tap came at the 3:16 mark.

The win for Urijah Faber improves his overall record to 28-6 (4-2 UFC), as he looks to climb one step closer to a title shot.