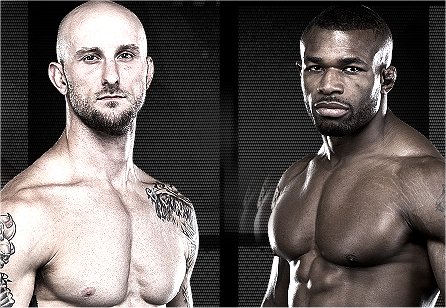 “Bubba” McDaniel had some shaky performances during his time on this season’s The Ultimate Fighter but he lived up to the hype in his UFC debut, dominating Gilbert Smith for nearly three rounds before locking up a fight-ending armbar to secure his first UFC victory.

Both fighters came out firing, but it was McDaniel that landed with a powerful one-two combination before putting Gilbert Smith on the cage to start. McDaniel scored in close with dirty boxing and short elbows, forcing Smith to change levels and look to take the fight on the ground. Smith earned the takedown but got swept by McDaniel almost immediately. McDaniel scored from the top with elbows and big left hands before both fighters made their way back to their feet. Smith would earn another takedown later in the round, but again “Bubba” was able to sweep using a guillotine to reverse positions.

McDaniel opened up his striking to start the second, peppering Smith with well-timed combinations. Smith closed the distance again, but McDaniel fought off the takedown attempt, then landed with knees inside. After a restart “Bubba” went right back to picking Smith apart from the outside. Smith managed to get inside and lock up a guillotine attempt, but McDaniel defended perfectly, jumping across the body of Smith to relieve pressure from the choke. “Bubba” then went to work with punches from the top forcing Smith to roll and give up his back. After McDaniel scored from the top, Smith managed to get back to his feet to close out the second round.

McDaniel came out fast in the third, catching a kick of Smith and firing back with a right hand over the top. McDaniel continued to land at will then stuffed a takedown attempt to end up on top early in the round. “Bubba” passed to side mount, then full mount and landed some elbows before Smith managed to get back to half guard. The top game of McDaniel again forced Smith to give up his back midway through the final round. Smith managed to reverse positions but found himself in a triangle attempt by McDaniel. “Bubba” transitioned from the triangle to the armbar and got the quick tap to win his UFC debut at 2:49 of the round.