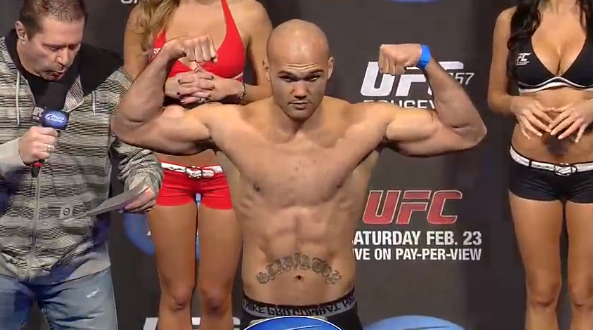 [ads1]UFC officials have announced that the UFC 162 card will feature a heavyweight clash between Shane del Rosario and Dave Herman. Del Rosario (11-2) is coming off his second consecutive TKO/KO loss in the UFC after entering the organization with an undefeated record.

He’ll be looking to get back on track against Dave Herman (21-5) who is coming off three consecutive loss, including a submission loss to Antonio Rodrigo Nogueira at UFC 153 in his last outing.

UFC 162 will be headlined by the UFC middleweight title fight between champion Anderson Silva and challenger Chris Weidman. UFC 162 will take place on July 6 at the MGM Grand Garden Arena in Las Vegas, Nevada.

UFC officials are wasting no time filling up the UFC on FOX 8 card that’s set to take place on July 27 at the KeyArena in Seattle, Washington. A welterweight clash between the final Strikeforce welterweight champion Tarec Saffiedine and Robbie Lawler has been set for the card. Also, a lightweight bout between Danny Castillo and Bobby Green will also be on tap.

Saffiedine (14-3) is coming off his upset win over Nate Marquardt in January where he became the final Strikeforce welterweight champion. He has won four consecutive fights since a unanimous decision loss against Tyron Woodley in January 2011.

Lawler (20-9, 1NC) make a successful return to the UFC at UFC 157 when pulled off a big upset by knocking out Josh Koscheck in the very first round. Lawler was coming off a unanimous decision loss to Lorenz Larkin prior to the win over Koscheck.

The main event for the UFC on FOX 8 card is expected to be announced soon. Stay tuned to ProMMAnow.com for more UFC news and coverage.