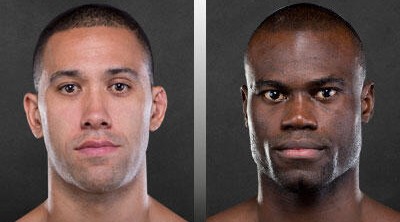 We are down to the semifinals for The Ultimate Fighter 17. This is the last official episode of the season with the TUF 17 Finale taking place this Saturday in Las Vegas.

And the semifinal match-ups are:

This episode starts out at Harley Davidson in Las Vegas where the semifinalists go through a Harley Davidson boot camp. The TUF 17 winner gets a customized Harley Davidson. They get to design it the way they want it during this boot camp, and if they win, they will build it to their specifications.

Now the guys are getting their hands wrapped and warming up. First up is Gastelum vs. Samman. Sonnen says Gastelum is not great at anything but he’s effective. 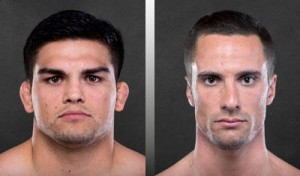 Round 1 – Touch gloves. Leg kick Samman. Body kick. Left to body right to head from Gastelum and he puts Samman on his back, inside full guard. A can opener opens the guard and Samman goes for an armbar, readjusts, Gastelum gets free and is back inside full guard. Gastelum postures up and takes some punches from Samman off his back. He tries to pass but Samman scrambles to his feet, clinched against the cage, Gastelum turns him around, knee to body. They struggle in the clinch, Samman goes for a takedown but ends up on bottom and Gastelum is dropping the ground and pound. He ends up on top in half guard dropping elbows. Now inside full guard. He postures up and Samman throws his legs up looking for something but Gastelum lands some hard punches and passes to side mount. Samman gives up his back and Gastelum locks in the choke and Samman taps out. Wow! Did not see that coming. I think a lot of people were counting Gastelum out, myself included to be honest. I kind of assumed it would be Hall Uriah Hall and Samman in the finals. Great performance by Kelvin Gastelum.

Samman says he’s in shock and it was a complete surprise. Maybe he was overlooking him a bit?

“We all at this point realize how scare and how talented Uriah is. All of us except Uriah.” –C. Sonnen

Sonnen tells Hall he can beat everyone in the UFC middleweight division right now, including Anderson Silva. That’s powerful. If anyone would know, it’s Chael. That’s been his division for years.

Dylan Andrews was picked dead last and now he’s one step away from the finals. Their gameplan is obviously to put Hall on his back. I like this match-up. Asst. Coach Stone Horse gives him a nice inspiring talk and Coach Jon Jones ays Dylan has all the tools to beat Hall, he just needs to do it. 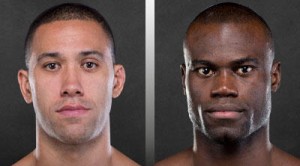 Round 2 – Sonnen tells Hall he’s doing great. Jones tells Dylan he threw about five punches and doesn’t know why he’s not being active. Hall comes out aggressive working kicks and jabs. Leg kick. Overhand right from Dylan, he shoots, stuffed and Hall pushes him to the ground. Lets him up. Jab from Hall. Right from Dylan. Sonnen calling for more jabs. Dylan bleeding. Jones wants action. Jabs from Hall. Overhand right from Dylan. Dylan gets in close with punches and finally gets the takedown. Hall looking for a kimura straight away as Dylan lands some body shots with 2 minutes to go. Hall cranks on the kimura but Dylan is able to defend for a bit, before he cranks it out again. Body shot sfrom Dylan as Hall continues to look for the kimura. With not much time left, Hall finally lets it go and delivers punch after punch from the bottom until Dylan starts holding his head, rolls over and is done. Hall mounts him and delivers some big punches but they appear hardly necessary. He basically finished him with punches from THE BOTTOM! WTF? Dana gets up and is tripping, “Holy sh*t this guy! From the bottom!” Dana said he hasn’t seen anything like that in 14 years. This kid is dangerous, which reminds me I recently saw a highlight reel of Hall from his days in the World Combat League. Check it out. He’s been doing this for quite some time.

Sonnen said Hall and Gastelum were very even in practice and really doesn’t know who is going to win. Dana said it was if not the best season they ever had, it’s definitely one of the best and is looking forward to most of the guys fighting in the Octagon.

Thanks to @ZProphet_MMA for the GIFs.

3 thoughts on “The Ultimate Fighter 17 episode 12 recap: The semifinals”