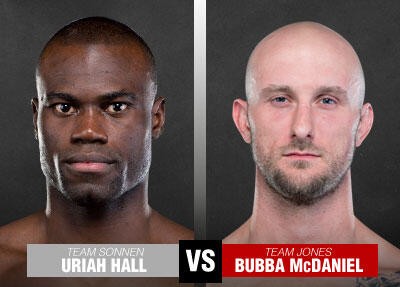 [ads2]We move on to the final two quarterfinal match-ups for The Ultimate Fighter season 17. Tonight’s match-ups include Josh Samman vs. Jimmy Quinlan and Uriah Hall vs. Bubba McDaniel.

We open with a Team Jones training session and Bubba McDaniel is over in the corner laying down citing a lot of pain from fighting so many times so close together. There’s some doubt he will be able to continue.

Coach Jon Jones is very impresses with Josh Samman and said he dominates pretty much every practice. His belief is that Jimmy Quinlan will be shooting in on him quickly. He admits Quinlan is a better wrestler but doesn’t think it will be enough to beat him.

Bubba feels the fight between Samman and Quinlan is a toss-up. Gilbert Smith is giving the edge to Quinlan because Samman is a bit injured.

McDaniel is still complaining about the match-up with Uriah Hall. He mentally doesn’t seem up for the fight at this point, thinks Dana White made the match-up because he didn’t like McDaniel’s previous fight and wanted to try to get rid of him.

Quinlan says he likes the match-up with Samman and doesn’t feel Samman is technically better than him. Coach Chael Sonnen points out that Quinlan has never lost a fight. Quinlan said his gameplan is pretty much the same every time and that is to get the fight to the ground — and he knows Samman knows this.

Coach Jones says McDaniel’s back has been giving him a lot of pain and they don’t know if it’s coming from his back or kidneys. The doctor recommends he gets blood work done and that’s what he does to see if there are any issues that would keep him from fighting.

Samman said Quinlan originally rubbed him the wrong way and didn’t care for him much but now he does kind of like him. Despite that he said he plans to hurt him in the cage and feels his knockout power will make the difference. 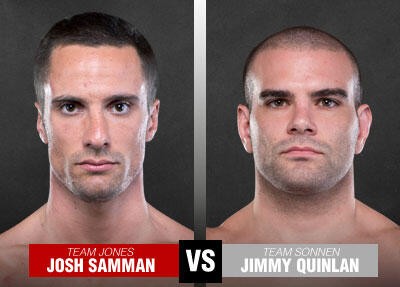 Round 1 – No glove touch. Josh fires off a couple punches and Quinlan shoots in, picks Josh up over his head walks toward the center and slams him. Quinlan inside half guard as Samman lands several elbows from bottom to the body. Quinlan takes side control but Samman recovers half guard and goes for an arm. Quinlan escapes and takes top position in half guard. Elbows from Samman to the head as Quinlan moves to side control. Samman recovers full guard and lands a few punches. Quinlan doing no damage. He postures up and slams Samman. Gives some very light body shots but mostly lay and pray. He stands up and tries to pass and succeeds to side mount. Samman pushes off the cage but Quinlan maintains top position, lands a body shot. Samman gets to his feet, lands a knee to the head, a couple punches, another knee to the head and Quinlan goes to his knees as Samman jumps on his back and lands big punches, double punches to the side of the head and Quinlan taps to strikes. WTF?

Samman points out he’s the only guy who’s finished all his fights. They talk and hug it out afterward. Quinlan said he had trouble breathing and lost motivation when Samman took his back. He admitted he “quit, basically”.

McDaniel’s blood work came back just fine and his back pain has nothing to do with his kidneys. This gives McDaniel the confidence he needed to mentally get up for the fight. Hall says Gilbert Smith told him Bubba was scared of him.

Sonnen is very confident in Uriah Hall, calls him a hard worker and very tough. His one “weakness” seems to be his mental game from time to time according to Sonnen. Sonnen himself can relate to this and tells Hall so. All the signs are pointing to a Hall victory here.

Remember too Bubba is going into this fight with the mental picture of having seen Hall wheel kick his teammate Adam Cella unconscious in the most devastating knockout in TUF history.

Round 1 – Touch gloves. McDaniel comes forward, eats a big knee, then a big right from Hall drops Bubba face first, a pool of blood is pouring out from under him and he’s asking what’s wrong with his eye.

“This guy is the nastiest fighter in Ultimate Fighter history,” White says.

Bubba says he has no idea what happened.

Definitely the most exciting batch of semifinalists that I can remember in TUF history.  Dana calls it the “most interesting” semifinals in TUF history and calls the fighters in to see who they want.

Both coaches wanted Josh to fight Uriah and Kelvin to fight Dylan. Personally I’d like to see Josh and Uriah in the finale — that was also Josh’s wish. Let’s wee what Uncle Dana chooses…

And the semifinal match-ups are as follows:

Dana knows what makes sense. He’s also hoping for a Hall vs. Samman finale it seems.

See ya next week!

Thanks to @ZProphet_MMA for the GIFs.

1 thought on “The Ultimate Fighter 17 Episode 11 Recap: Samman vs. Quinlan, Hall vs. McDaniel”