XFC 24: Holtzman vs. Newell set for June 14th in Tampa 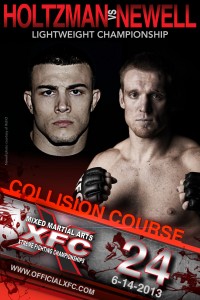 Xtreme Fighting Championships will return to Tampa Bay on June 14 for XFC 24 at the USF Sundome.

The event will be headlined by the XFC lightweight title fight between champion Nick Newell (9-0) and challenger Scott Holtzman (4-0).

The XFC held their first show in Tampa, Florida, in the Tampa Bay Times Forum (then the St. Pete Times Forum) back in 2007, and will be returning to their roots with the XFC 24 show after traveling across the southeastern United States.

“I am excited to be coming back to Tampa. This is where it all began for us,” said Prisco. “We spent some time expanding our fan base and signing talent from across the country, now it’s time for the XFC to deliver another great show in Tampa.”

More fights are expected to be announced soon, including the XFC debut of the latest open tryout winner in Jeremiah Labiano.

Newell earned the XFC lightweight title with a first round submission win over Eric Reynolds in his last outing at XFC 21. Newell has won six fights via submission and two via TKO/KO with only one fight going to the judges. Holtzman earned his lightweight title shot with a unanimous decision victory over previously unbeaten Jason Hicks.

Stay tuned to ProMMAnow.com for more XFC 24 news and coverage.