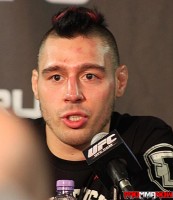 UFC welterweight Dan Hardy has had to withdraw from his UFC on FOX 7 bout with Matt Brown due to a heart ailment.

However, UFC officials have wasted no time in finding a replacement as Jordan Mein has agreed to face Brown.

Jordan Mein (27-8) just competed on the UFC 158 card, stopping the durable Dan Miller via first round TKO in his UFC debut.

Brown (16-11) has won four consecutive fights, including his KO win over Mike Swick in his last outing at UFC on FOX 5.

The UFC on FOX 7 card will be headlined by the UFC lightweight title fight between champ Ben Henderson and former Strikeforce champion Gilbert Melendez. The event will take place on April 20 at the HP Pavilion in San Jose, California.