The UFC on FUEL TV 9: Gustafsson vs. Mousasi full card 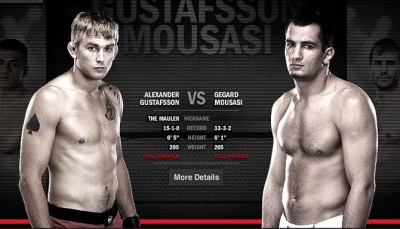 The UFC will end the month of March on a high note as UFC 158 appears to be trending very well PPV wise. The world’s largest MMA promotion will not have another event until the UFC on FUEL TV 9 event that will be headlined by the light heavyweight bout between Alexander Gustafsson and Strikeforce import Gegard Mousasi.

Gustafsson is expected to be in line for a title shot should he be victorious over Mousasi. A Mousasi win would be instant credibility for the former Strikeforce light heavyweight champion would definitely put him in the mix at the top of the division.

The UFC on FUEL TV 9 main card(FUEL TV) is below: