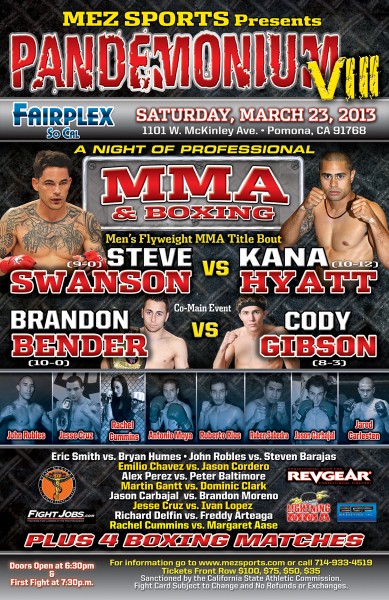 Steve Swanson is the younger brother of WEC and UFC veteran Cub Swanson and hails from Albuquerque, N.M., where he trains alongside his brother under the tutelage of Greg Jackson and Mike Winkeljohn. Swanson, who began his pro MMA career in 2009 has racked up nine straight victories, with five coming by way of knockout. He has finished his last five opponents in the first round; four by knockout, one by submission.

Originally from Hilo, Hawaii, Kana Hyatt is a dangerous and well-rounded veteran who can end fights quickly on the ground or on the feet. He trains with former MFC lightweight champ and UFC vet Antonio Mckee, who will be in his corner on fight night. Although Hyatt doesn’t have the best looking record on paper, the majority of his losses have been at heavier weight classes and flyweight seems to be where he’s most dangerous.

Hyatt is coming off a unanimous decision win over Pandemonium veteran Adam Rothweiler this past October and a win over a tough up-and-comer like Swanson would prove he’s got things on track.

A guest on Pro MMA Now Radio Sunday, Pandemonium Fights promoter Craig Zimmerman told us what fans can expect when Swanson and Hyatt face off on Saturday:

“At 125 pounds Kana Hyatt has been very successful. I’ve had a lot of guys not want to fight him because they tell me he hits like a mule, he hits hard. And he’s got some pretty strong take down defenses. And if you’ve never seen Steve Swanson fight, he hits hard too. So I think for the first time, if you’ve never seen some hard-hitting flyweights, that’s a great fight and that’s five five-minute rounds. So, if that goes the distance you’re going to see two guys in a war.”

Also on the Pandemonium VIII card is a 135 pound match-up between two of Southern California’s hottest up-and-coming bantamweight prospects, John Robles (6-1) and Steven Barajas (5-0). Robles has finished five of his six wins by knockout, while Barajas has stopped all five of his opponents in the first round (four via submission, one via KO).

In addition to 11 scheduled MMA bouts, Pandemonium VIII will also feature four pro boxing matches, including a 123 pound bout featuring 13-0 John Amuzu, who has won all 13 of his bouts via knockout. Amuzu, who is from Ghana, will be making his U.S. debut against tough Mexican Pablo Batres.

Zimmerman said they are kicking things off with a heavyweight bout and explained why fight fans should tune in Saturday night:

“Fans can expect a full night of nonstop action. We’re closing out the night with a title fight. The first fight of the night is a heavyweight fight, a guy Eric Smith, who has been training with Overeem they tell me. He’s fighting Joe Bryant. Two big heavyweights that I don’t think want to see round two. So I think when you start that night with two big boys swinging and end it with two little guys swinging and a whole lot of action in-between, I think there’s a lot for the fans to look forward to.”

For ticket information for those planning to attend the fights at Fairplex So Cal in Pomona, visit www.mezsports.com or call 714-933-4519. The live stream will be geo-blocked for those living near Pomona.

One thought on “Pandemonium VIII to stream LIVE on ProMMAnow.com Saturday, March 23”