The UFC on FX 8: Belfort vs. Rockhold card 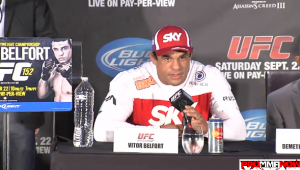 UFC officials have recently announced several bouts for the UFC on FX 8: Belfort vs. Rockhold card that’s slated to take place in Brazil on May 18th. The event will take place at the Arena Jaragua in Jaraguá do Sul, Brazil, and will be broadcast live on FX.

Middleweights Vitor Belfort and former Strikeforce middleweight champion Luke Rockhold will square off in the main event. This will be Rockhold’s UFC debut.

The UFC on FX 8 fight card thus far is below:

The card will likely have a couple more fights added in the near future. Stay close to ProMMAnow.com for more UFC on FX 8 news and coverage.
Follow @PROMMA