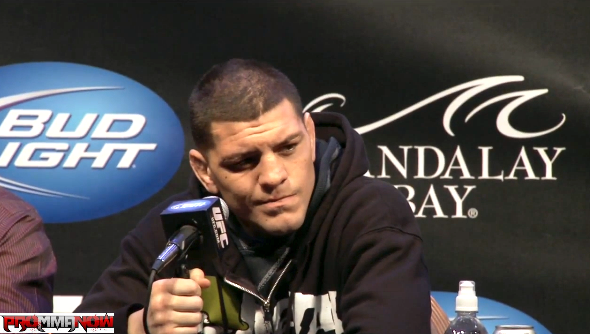 In today’s UFC 158 conference call things got more then heated as Georges St-Pierre and Nick Diaz engaged in a tense war of words.

The call which eventually lasted just over 45 minutes was quite calm to begin with, but then Nick Diaz made some comments about UFC welterweight champion GSP.

These comments led to a question aimed towards GSP, asking him if he is “pampered”?

“Let me tell you something uneducated fool” said St. Pierre. “I have not always been like this, I have not always been rich. I start from the bottom, I make myself work very hard to be where I am right now. I know you don’t believe this because you didn’t succeed yet, and maybe you will never succeed in your life because I don’t think you are smart enough to understand how you should do to reach that point. But when you talk about stuff that people are doing for me it’s called passive income, when you reach a point for your business that you need a team to work for you.”

This verbal battle continued for a while with the topic moving over to Nick’s dislike towards some comments GSP supposedly made about him deserving to be “beat down”.

“I seriously believe that you told that to the camera, so you believe that I deserve to be beat down.” Diaz said. “You’re making those statements to the whole world, that I am this piece of s**t that deserves to be beat down. Then you let Dana act like I’m the most disrespectful person that you have ever met, and I deserve to take an a** whooping or your gonna beat the s–t out of me, and you let him say that.”

The call today has definitely made things a lot more interesting and has elevated the level of animosity between these two men considerably. With UFC 158 set to take place on March 16, which is just over a week away, the anticipation for this matchup has increased and the story to accompany it has become even more interesting.

Stay close to ProMMAnow (www.prommanow.com) for all the latest UFC 158 news.