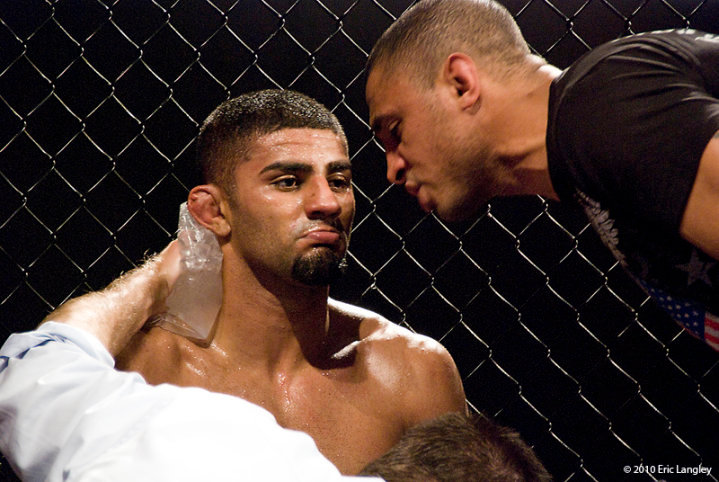 Due to a broken hand suffered in training, Douglas Lima (24-6) will no longer be fighting at Bellator 93 on March 23 in the finals of Bellator’s Season 8 Welterweight Tournament. Lima was set to face fellow finalist Ben Saunders (16-5-2) for the $100,000 grand prize and a shot at the 170-pound title currently held by Ben Askren.

The match has been postponed until Summer and Saunders will wait on the sidelines according to Bellator officials.

Lima originally defeated Saunders via second round KO in Bellator’s Season 5 Welterweight Tournament Finals in Nov. 2011, but lost a decision in his Welterweight Championship bout with Askren. Lima is now looking for another shot at Askren.

Lima commented on the situation:

“I’m really disappointed, but I know this is the right decision and I just need to heal up and get my $100,000 prize. Ben is a great guy, but he’s been in my way before, and I want my rematch with Askren.”

Lima has already dispatched Michail Tsarev via TKO in the quarterfinals and Bryan Baker via KO in the semifinals this season. With just one more stop along the way, and against an opponent Lima has already defeated once, fans and fighters alike will have to wait to see how it all plays out.

“Douglas and Ben are two of the most exciting and explosive welterweights in the game today, and while it’s disappointing to have to delay this fight, injuries are a part of our game and I have no doubt it will be absolute fireworks this summer when these two meet.”

Bellator 93 will take place Thursday, March 21, at Androscoggin Bank Colisée in Lewiston, Maine, and feature the Season 8 Lightweight Tournament Finals between Dave Jansen and Marcin Held and a heavyweight tilt between Eric Prindle and Brett Rogers.