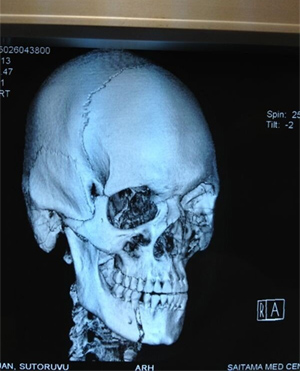 UFC heavyweight Stefan Struve has been in his share of wars in his MMA career. He has been viciously knocked out four times including his UFC debut against Junior dos Santos. He had his head split open in his next fight against Dennis Stojnic before coming back to submit him in the second round at UFC 99 in Germany.

Struve added another war story to his career on Saturday night as Mark Hunt landed some crushing punches that ultimate broke Struve’s jaw.  Check the pic below:

You can see the break clearly which is pretty much where the left hook that finally put Struve down for the count landed.

“Thanks for the support everybody,” Struve tweeted. “I wanted Herb to take the tooth out of my cheek and continue but then it turned out my jaw was broken.

“Wired my jaw in the hospital here and flying back to get surgery as soon as we land monday in Holland, thnx for the great care @ufc.”

Struve was riding a four fight winning streak going into the fight with Hunt at the UFC on FUEL TV 8 event that took place Saturday in Japan. Struve had been fighting smarter as of late, trying to avoid unnecessary damage from heavy hitters. He did the same with Hunt, pulling guard and going for multiple submissions, but as Struve got tired he went back to his old style of rock’em sock’em robot which ultimate cost him a win and months away from competition with a broken jaw.

Stay tuned to ProMMAnow.com for more UFC on FUEL TV 8 news and coverage.