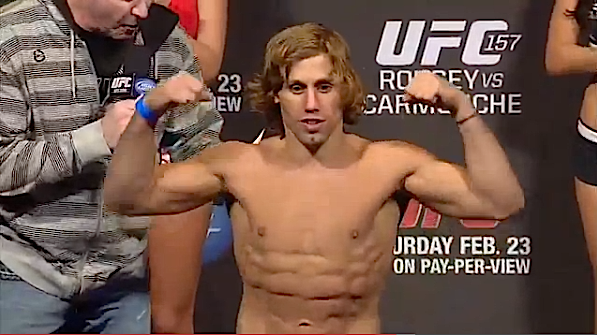 Fresh off a first round submission win over Ivan Menjivar at UFC 157 this past weekend, Urijah Faber (27-6) will return to the Octagon on April 13 against Scott Jorgensen (14-6) in the new main event for the TUF 17 Finale at Mandalay Bay Events Center in Las Vegas.

The new headliner comes as a replacement for a flyweight championship bout scheduled between title-holder Demetrious Johnson and John Moraga, after it was announced Tuesday Johnson had suffered an injury and would no not be able to compete on the card.

UFC President Dana White commented on the decision to put Faber right back in so quickly:

“Urijah Faber is one of the best bantamweights in the world and he proved it at UFC 157 by submitting Ivan Menjivar in the first round. He’s ready to jump right back in the Octagon on April 13 with Scott Jorgensen, who’s ranked seventh in the world at 135 pounds. Both of these guys like to finish fights. This is a really exciting main event for the TUF Finale!”

Coincidentally, Jorgensen is also coming off a first round Rear-Naked Choke submission win in his last fight, when he defeated John Albert at UFC on Fox 5 back in December. Both Faber and Jorgensen were WEC standouts and both are 3-2 in their UFC tenure.

In addition to the Faber-Jorgensen main event, a Season 17 winner of The Ultimate Fighter will be crowned, earning the traditional prize of a six-figure contract with the UFC (and a Harley-Davidson motorcycle).

The TUF 17 Finale card will also include former Strikeforce women’s bantamweight champion Miesha Tate taking on the undefeated Cat Zingano in what will be the second women’s bout in UFC history. And it’s very likely the winner of that match could move on to face Ronda Rousey for the 135 pound UFC women’s crown.

Other bouts on the card include a heavyweight showdown between Travis Browne and Gabriel Gonzaga, a featherweight match-up between Bart Palaszewski and Cole Miller, and a featherweight bout between TUF veteran Justin Lawrence and Houston’s Daniel Pineda.