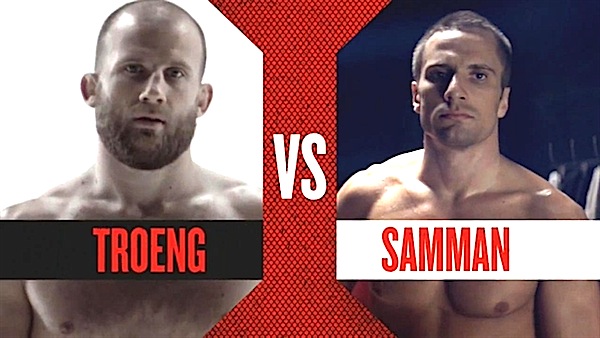 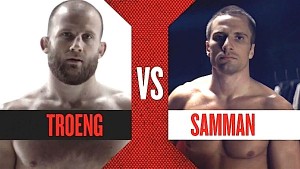 Sonnen said Troeng vs. Samman could very well be the main event and the reason it’s happening next is because “no one is willing to fight either one” and all the guys in the house are intimidated by both of them.

Coach Jones tells Bubba McDaniel to keep his head up and that he is a prime candidate for the wildcard pick. Jones says he’s excited about the Samman-Troeng match-up. He calls Samman a “workhorse” and “strong” and is confident against whoever he matches up with. Sonnen calls Troeng a “sleeper”.

Troeng’s teammates make him a big “Thor hammer”. Well, at first they make him a small one, but they redo it into a giant one.

Team Sonnen’s Uriah Hall and Luke Barnatt get into an argument after Hall tagged him with a stiff jab in sparring. Barnatt felt the punch was extra hard, too hard for sparring with a teammate, but Hall didn’t feel he did anything wrong. Barnatt walked away from the sparring session refusing to work with Hall.

Barnatt said Hall is “an animal” and has the “best knockout” he’s ever seen in his life, but also said he’s not a team player, has an “awful attitude” and is “an ego-driven machine.”

Barnatt said he thinks Americans generally overlook Europeans in MMA and he hopes Tor Troeng has a good performance to show Americans what European MMA is all about. He said Troeng is ranked No. 3 or 4 in all of Europe.

Tor Troeng said he began martial arts when he was 9 and MMA when he was 16. He works at the University in Sweden doing research in Math. Sonnen called him “the most unassuming guy on the team” and because of that he is being underestimated.

“Tor knows more about martial arts and cagefighting than anybody on our squad,” said Sonnen. “The downside for Tor is that he’s so nice and he’s such a gentleman and at times we really need a killer instinct, we really need that methodical Tor to explode.”

Tor said there’s a Swedish saying, “Speaking is silver and silence is gold.” He translates that to mean, “It’s better to be silent if you don’t have anything to say.” This sort of helps explain his unassuming attitude, which many Americans probably aren’t used to.

Australia’s Dylan Andrews of Team Jones seems annoyed by his teammate Josh Samman, saying he thinks he’s a coach and is trying to take control and lead the ranks. Adam Cella said he calls Josh “Dad” and felt when they first arrived he was trying too hard to be a leader and control what people are eating.

Josh said they may think he’s a “know it all” but he’s just trying to be helpful. He also doesn’t seem to really get that they find him annoying, as he said he doesn’t think they are being serious and he finds it funny. He did admit he “made a move early to take up a leadership position” within the group — whatever that means.

Josh said the first time he tried out for The Ultimate Fighter he tore his quad during tryouts and it resulted in a blood clot they had to cut it open and let the blood drain. The doctors told him if he’d waited 12 more hours  he could have lost his leg.

Coach Jones described Samman as someone who “works really hard, great cardio, a lot of heart from what he’s seen, very well-rounded, good puncher, doesn’t kick as much as he’d like, good wrestling ability, good takedowns and takedown defense and he has a great triangle from the bottom.”

Samman said he was raised in a home by a single mother where violence wasn’t allowed. He wasn’t allowed to play football or play with guns or watch violent movies. He said he always did well in school and was in “gifted programs”.

Uriah Hall calls Gilbert Smith the “house troublemaker”. This was after Team Sonnen was sitting around the table and Gilbert asked Uriah who he’d like to fight and he said Luke Barnatt — who so happens to be his own teammate.

This didn’t sit well with the team. Kevin Casey voiced his opinion that Barnatt might beat Hall if that fight happened. Casey said for Hall to even bring this up brings division to the team.

Hall is next seen sitting with some of the Team Jones guys and can’t seem to get along with them either as he asks Adam Cella if his girlfriend is “a bitch” like he is. Hall tries to apologize for the remark but the damage is done.

Collin Hart of Team Jones called Hall a “loose cannon” and said anything can set him off. Hall told Hart he hopes to face him in the finals and that his “whole lay and pray thing” won’t work against him.

The coaches take all the guys bowling at Red Rock, and Sonnen challenges Jones to a three-frame game. If Sonnen wins Jones has to coach one session in a Team Sonnen jersey, and if Jones wins Sonnen will coach in a Team Jones jersey.

“Josh is Josh’s biggest fan,” said Adam Cella. He said Josh is always confident and his confidence is high going into this fight.

Gilbert Smith says he has no idea what Tor is going to come out with and calls him “a mystery”. He feels it could be the most intriguing fight of the season.

Tor says he is confident going in. Josh plans to be more aggressive and doesn’t feel anyone wants this more than he does.

Round 1 – Tor’s teammates have his hammer cageside. Touch gloves. Leg kick from Samman, slips, back up. Leg kick. Comes forward with a punch combo, tie up against the cage. Tor leaning on him against the cage. They wrestle in the clinch, Josh turns him around, knee to thigh. Again. Tor turns him around to the cage, gives a knee to the body. Josh gives one back, goes for a trip but ends up on the bottom with Tor in half guard. He postures up with punches, stands over him and puts him back down before he can get off the ground. Josh makes his way up, body lock, gets Tor  to one knee, drops several punches as he threatens to takes his back. Clinch game and knees from Josh, more knees to the thigh. Tor is all defense right now. He slips on the break and backs away. Josh goes after him with a body kick then a one two combo on the chin and Tor goes down and out just like that. Perfect one-two ending as Tor got caught slippin.

Sonnen said Tor was too relaxed and lacked that sense of urgency, and he did something he never does in practice, he dropped his hands.

Josh said afterward, “If there was anybody on the other team itching to fight me, I don’t think there is anymore.” I would have to agree. He also said he feels he’s the number one seed in the house. Maybe. Uriah Hall is up there too.

Tor says he hopes he can find something to learn from the loss. Josh came in Tor’s locker room and apologized to him afterward.

Hall said when he thinks about Josh it’s like the movie where you just want to see the guy get his ass kicked. He also said he hopes he gets to fight him next. Now, that would be a great fight! Let’s hope it happens.

The ball is back in Team Jones’ favor and Jonny “Bones” picks his his number one pick,  Clint Hester to fight Jimmy Quinlan of Team Sonnen.

Sonnen said it’s a confusing match-up to him because it’s such a bad match-up stylistically for Hester. Quinlan has a strong wrestling background, is a two-time Pan-Am grappling champion, and Hester is a former pro boxer — the classic striker vs. grappler match-up.

Sonnen said he’s surprised they put their No. 1 pick in that situation.