RFA 7: Thatch vs. Silva set for March 22 in Colorado 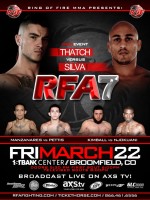 Resurrection Fighting Alliance (RFA) announced that it will make its first foray into the state of Colorado with RFA 7 – Thatch vs. Silva on Friday, March 22nd. The event will take place at the 1st Bank Center in Broomfield, Colorado, which is a suburb of Denver, Colorado.

The RFA 7 event will be headlined by a welterweight fight between Brandon Thatch (8-1) and Leandro Silva (18-7). The fight will be televised live and air on AXStv at 10 p.m. ET.

Thatch and Silva have knocked out a combined 17 opponents, including 14 in the first round, so don’t blink as this one could end quickly.

Thatch currently trains at Tri-Star gym alongside UFC welterweight champion Georges St. Pierre and spoke on the opportunity to train with one of the world’s best:

“It’s amazing being at Tri-Star and working with GSP. He’s definitely one of my favorite fighters, because he is so classy and effective. I’m going to stay here working with GSP and the team, until the first week of March, and then finish up my training with Grudge back home in Denver,” said Thatch.

Silva trains out of the Blackhouse MMA gym in Southern California and looks forward to the challenge against Thatch:

“On March 22nd, I’m going to show American fans what the Brazilian fans already know. That I am a complete fighter. Everyone is going to see what I’m capable of in the cage on AXS TV, and believe me, they will be talking about my win at RFA 7,” said Silva.

Also on the card will be Sergio Pettis (6-0) as he takes on Matt Manzanares (5-1) in a flyweight bout. Njokuani and
Pettis are the younger brothers of UFC stars Anthony Njokuani and Anthony Pettis.