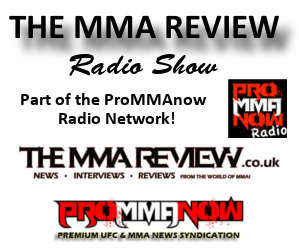 This is the third episode of The MMA Review Radio Show hosted by Jay Cee. The show features interviews with Dan Richards, who is the owner of Ultimate Impact Cagefighting and Lee Caers who will defend his welterweight title against Ashley Beaumont in the headline bout at Ultimate Impact Cagefighting 9 “Vendetta” this Saturday, Feb 23, at Leisure@Cheltenam in Cheltenham, England.

Also in this episode, Jay Cee goes through some FCC 5, BAMMA 12 and UFC fight announcements released this week. He discusses the 16 fighters that were recently cut by the UFC, recaps UFC on FUEL TV 7 and looks ahead to the UFC 157.fight card and match-ups.