Before I get into the meat of everything, let me throw out this disclaimer.  The opinions expressed herein are just that – my opinions.  Accordingly, they are not intended to be construed as, and are not, legal advice.  These are my opinions alone, and not the opinions of my employer.

ProMMANow.com initially reported when Nick Diaz’s suit was first filed. To put it simply, Diaz asked for judicial review of the NSAC’s decision to temporarily suspend him following his positive drug test following his loss to Carlos Condit.   The petition alleged violations of Nevada statutory law in addition to violations of Nick’s right to due process.

On 2/14/13, an Order was entered (and distributed on 2/15/13) denying Nick Diaz’s petition for judicial review.   The Order is attached to this article in full, so feel free to take a look for yourselves.  I am offering you the following information in the hopes it might help you better understand the process and what is involved at certain points in the decision making.

The entire Order can be summarized to say that the Court felt that NSAC followed the proper procedures in testing Diaz and then sanctioning him after he failed the test.  Accordingly, the Court did not feel that a review (and subsequent overturning) of the decision was necessary.

Who wrote the Order and why it matters

Something to note is that these Findings of Fact and Conclusions of Law were not actually written by the Judge, they were written by someone in the Nevada Attorney General’s Office who acted as counsel for NSAC.  As you can see at the bottom of the Order, it states “Respectfully submitted by….”  This is a common practice in many areas of law.

When a non-trial issue such as this arises, after arguments are made and/or written briefs are submitted, both sides submit orders such as these to the judge for the judge to sign off on when the judge makes his or her decision.  Judges are always free to write their own opinions, but when the judge feels that the submitted order accurately reflects their decision, the judge will sign off on the order, as was the case here.

Does this imply a bias?  Absolutely.  When I was starting out in private practice and writing orders in cases of my own, my law partner would often tell me “Give the judge the reasons you should win, and then write what you want them to say in the order.”  Lawyers hang on the details; that’s no secret.  And a small detail in this case can absolutely influence future cases.

There is no doubt in my mind that the Attorney General wanted an order signed by the Court that contained such findings of fact as numbers three, four, seven and eight, which could all be relevant in future cases where the person in question has tested positive before, used medicinal marijuana, and seen/filled out a pre-fight questionnaire.

So, while there may be an inherent bias, if the judge signs an order you wrote, good for you – your “bias” wins that day.

The Findings of Fact provide a brief factual description of the relevant events, for example: Nick Diaz tested positive for marijuana metabolites following his bout with Condit; these test results provided “substantial evidence” that Diaz used marijuana prior to the fight, and so on.

One of the more notable findings of fact was number three, which stated that “There is substantial evidence to show that because Nick Diaz had been disciplined by the Commission in 2007 for using marijuana before a contest, he knew that the Nevada State Athletic Commission will discipline any contestant who uses a drug which has not been approved by the Commission before or during a contest.”

With this finding, the Attorney General’s office, and subsequently the Court showed Diaz’s apparent prior knowledge of NSAC’s regulations.

Diaz’s lawyers apparently had a made an argument that Diaz legally uses medicinal marijuana in California, but as the Findings in the Order stated (Finding #4), this was irrelevant to a violation of NSAC regulations.

The Findings further spoke of the facts that there was “substantial evidence” to show that Diaz knew medicinal marijuana usage and general medical conditions had to be disclosed to NSAC and that he had failed to do so.

The use of the phrase “substantial evidence” in this case stops short of saying that there was hard evidence that Diaz knew of all these things, but that his knowledge can be inferred because of his prior violations and because of questions on the licensing and medical forms Diaz had to fill out prior to being licensed as an MMA combatant in Nevada.

The Conclusions of Law section starts out confirming the Court’s reliance on NSAC’s authority to uphold and enforce its regulations.   As a general matter of practice, Courts are often hesitant to call regulations such as these into question because they underwent a review period prior to being enacted.  Unless a regulation is clearly out of place, Courts will not typically allow reviews such as that which Diaz was requesting.

The Conclusions further stated that a due process violation did not occur because Diaz tested positive on the post-fight drug screen, which violated NAC 467.850.  This is the section of the Nevada Administrative Code that refers to “Unarmed Combat”, i.e. the regulation of sports such as mixed martial arts.  Subsection 850 speaks to “Administration or use of alcohol, stimulants, drugs or injections; urinalysis or chemical tests; disciplinary action.”

The Order also stated that the Commission did not exceed its authority (Conclusion #5), and because Diaz violated sections of the NAC, the Commissions did not commit other violations alleged by Diaz’s attorney (see Conclusion #6 for specifics).

The Order noted that Diaz had violated NAC 467.886, “Licensees prohibited from engaging in activities that bring disrepute to unarmed combat.”  The specific language of this section is very brief, but conveys broad sanctioning power on the commission.

What does “any activity that will bring disrepute to unarmed combat…” mean?  That’s up to the commission to decide.  Again, this is a very broad area that gives commissions a lot of discretion.

In Kentucky, for example, former TUF contestant and UFC fighter Junie Browning had his licensed revoked under a regulation similar to this because of, among other things, the incident at the Las Vegas hotel where he was involved in an alleged assault incident with a nurse.

Theoretically, any commission with this language could revoke any combatant’s license for any reason.  While the decision could ultimately be overturned, the combatant would have to file a petition like the one Diaz filed to get a court to reverse the decision.

I am not aware of any incident like that – where a combatant has had a license suspended under just that section, but it is possible.

Marijuana legalization and the effect it would have (if any)

Given the recent push for marijuana legalization in many states, one might ask how legalization of marijuana would affect decisions like this in the future.   As the Conclusions of Law in the Order stated,  “The Nevada State Athletic Commission has broad jurisdiction to interpret and rule on its own Statutes and Regulations”.

Unless the State of Nevada abolished the NSAC regulations, NSAC could still ban marijuana usage by “unarmed combatants” despite legalization by the state.   Should NSAC allow medicinal marijuana usage (I do not know if they currently do), NSAC could still hand down similar sanctions if a fighter were to fail to disclose the medicinal usage on the pre-fight questionnaire.

In addition to being a lawyer, I also manage mixed martial artists and I have attended numerous pre-fight meetings in Kentucky, Ohio, Tennessee, and Florida.  Having attended a ton of MMA events from small regional shows all the way up to the UFC, in addition to the positive things I have heard spoken about commissions, I have heard numerous fighters and support personnel say things like the commission is out to get them, “who cares if a fighter smokes weed”, and so on.

Who cares?  The commissions care.  Are some commissions just trying to bust certain fighters?  Maybe.  I’m not a mind reader, I don’t know.  But I do know what I hear, and something I’ve heard from Kentucky Boxing and Wrestling Authority representatives Todd Neal and Angela Robertson always resonates with me.  In the pre-fight meeting, when talking about Kentucky’s pre-fight medical questionnaire, they always say to fighters to list all of the drugs they are taking.  All of the drugs.  Why?

Because, as they always say, the medical form speaks for you when you can’t speak for yourself.  If a fighter is knocked out, his or her cornermen may not know what drugs they’ve taken, and if a knocked out fighter has to receive medical attention, the doctor may unknowingly administer a drug that could have a negative reaction when mixed with another drug – this could spell bad consequences for the fighter, simply because they refused to report it.

I am not surprised by the Court’s decision, and I believe it is the right one.  Diaz violated NSAC’s procedures and was sanctioned accordingly – the Court should not have overturned any of this simply because Diaz did not agree with the policies or can legally use marijuana in another state. 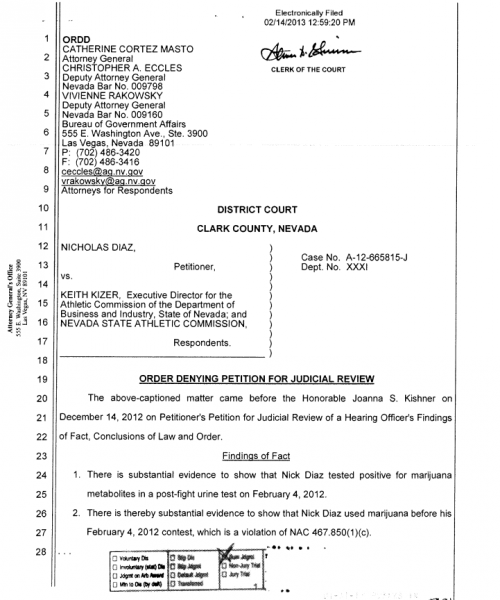 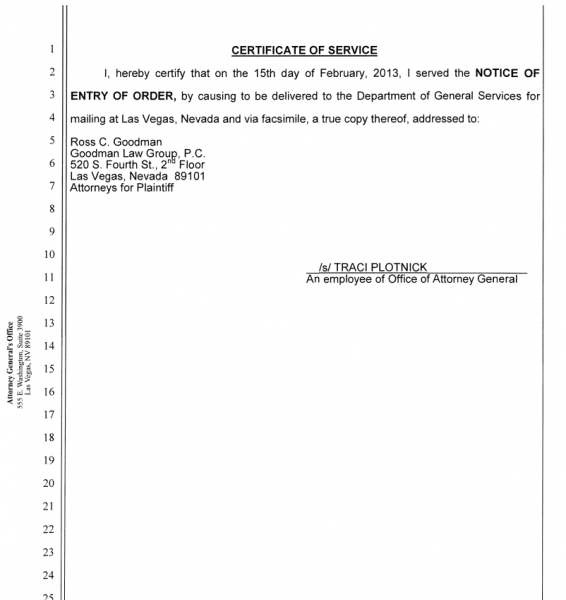 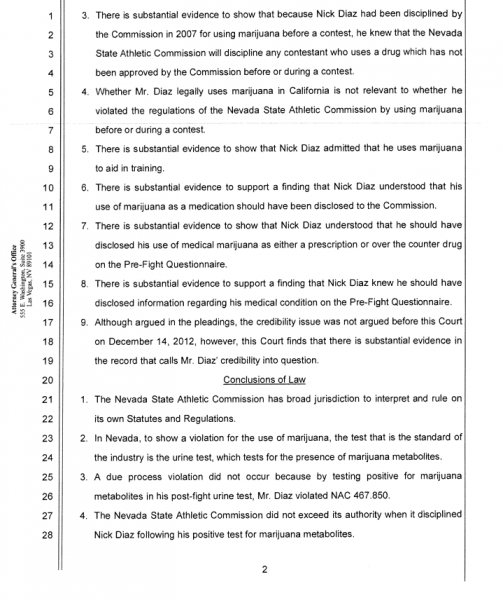 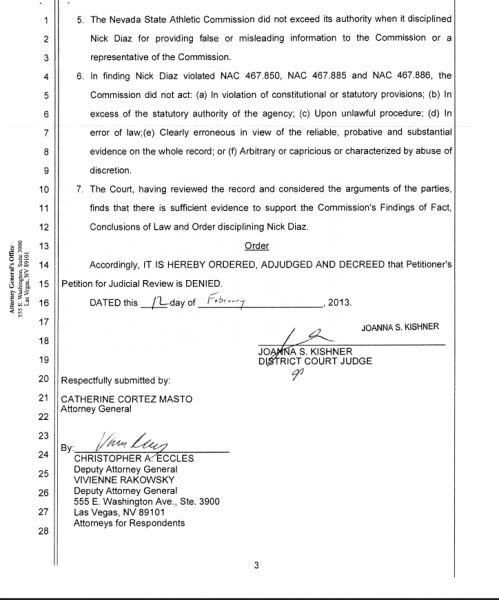