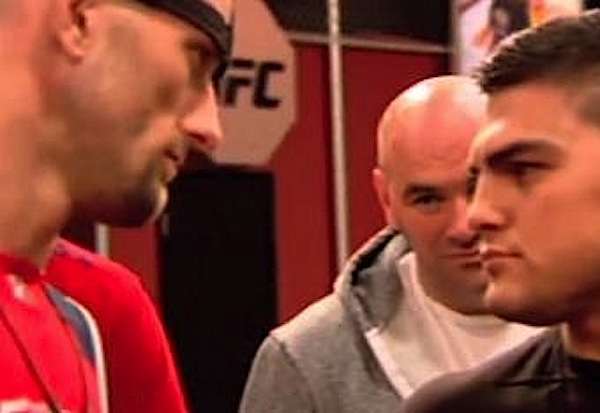 Jon Jones got to pick the next fight following Collin Hart’s decision win over Kevin Casey in episode 3. Jones picked one of his Jackson MMA teammates, Bubba McDaniel, to fight Kelvin Gastelum of Team Sonnen.

Jones says he believes McDaniel is the all-around better fighter, more experienced and the reason they picked Gastelum is because he feels he is the weakest link on Team Sonnen. Sonnen says they have many ways to win the fight, and feels Gastelum’s better conditioning will play a large role.

Gastelum gets a special phone call from UFC women’s champ Ronda Rousey. Knowing Gastelum is a big Rousey fan, Coach Sonnen told him someone was on the phone and wanted to talk to him.

He handed Gastelum the phone and it was Ms. Rousey herself, wishing him good luck in the fight and giving him more incentive to win by saying she would come and hang out and teach a session if he gets the victory over McDaniel. Sonnen then tells Gastelum they have to keep this phone call secret because phone calls aren’t allowed in the TUF house.

Gastelum says he’s one of the least experienced fighters in the house and believes most of the guys underestimate him. His pro record is 5-0. Sonnen admits to Coach Jones that all the guys seem to be scared of Bubba McDaniel. Sonnen said knowing that McDaniel ran five miles on his day off “won him over”.

Team Sonnen’s Luke Barnatt says he feels it was a “cheap shot” for McDaniel to pick Gastelum to fight because of the vast experience difference. Barnatt also tells his teammates that he thinks Gastelum is going to knock McDaniel out. He says he sees a lot of fire in Gastelum and is going to prove everyone wrong.

Next we see Chael Sonnen and a few guys from each team doing what all tough guys usually do when they hang out — play charades. Gilbert Smith acts out the movie “Coming to America” and Uriah Hall acts out well, Gilbert Smith. The whole group is cracking up and having a good time. Nice clean American fun. Tough guys.

While charades are going on, Bubba McDaniel said he wasn’t in the mood for “bonding”, and is seen sitting outside alone by the fire. He talks about being bullied growing up and said he had a lot of issues because of it. “I was that kid that shouldn’t have been alive by the age I am now,” McDaniel explained.

McDaniel said being picked-on growing up caused him to rebel, and in turn, he had a lot of problems with the law as he got older. McDaniel admits there was a time he didn’t care what happened to him, but having his daughter changed his perspective and gave him a reason to be alive.

McDaniel shared how he got started fighting in MMA when at 19-years-old he heard on the radio about a local “Tough Man Contest” going on. He said he thought he was a tough kid, he signed up and got whooped.

“I’ve been scraping for years trying to get by. Paying your dues and paying your manager and trying to live, eat right, pay child support. It’s been a long sad road in my life to be where I’m at in MMA, but I believe on the other hand, MMA helped save my life,” said McDaniel.

Gastelum says he’s a bail bondsman from Yuma, Ariz. He says he and his sister were raised by his mom who was single, from Mexico and knew no English. She had a hard life and Gastelum hopes to be able to pay her back and show that all she did for him was not taken for granted.

Gastelum knows fighting in the UFC will change his financial situation and hopes to make it so he can quit his job and train full time. Gastelum comes from a wrestling background, but says he’s been working a lot on his boxing and thinks it has improved majorly.

“I come from poverty, so I just want to let people know that with enough hard work and dedication and discipline, you can do whatever you want and you can achieve whatever it is you want to achieve,” Gastelum explained.

At only 21-years-old, Sonnen says Gastelum is the youngest guy in the history of The Ultimate Fighter. He admits McDaniel is tough, but says Gastelum is also tough, doesn’t get tired, can push the pace and may surprise everyone.

Gastelum knows Team Jones see him as the weakest link, and he feels that is going to give him an advantage because they are underestimating him.

“On fight day the only thing that changes is the environment,” Coach Sonnen tells his team. He then proceeds to tell them a story about a gentleman who brings in a two-by-four, sits it down and asks a group of people to walk along the two-by-four heel-to-toe. They do it, no big deal. The man then brings in two high step ladders and places the two-by-four on top of them, from one to the other and then asks who wants to walk it. No one did.

Sonnen explains how it’s the same thing here. It’s the same ring/cage they train in everyday. It’s the same type of cage they always fight in. The only difference is the environment — the referee, they make you take your T-Shirt off, Uncle Dana will be there.

“So many times we try to find the right emotion,” Sonnen tells his team. But when it comes down to it he explains it is “action” that is going to make the difference; using your fists, forward motion, getting up off your back, etc. That’s pretty deep.

Josh Samman of Team Jones explains why he doesn’t want the next fight if McDaniel defeats Gastelum. He says his finger is swollen, his knee is banged up, and his rib and neck hurt. He said he originally wanted to fight first or second, but says now the whole left side of his body is kind of messed up and ideally he would want to wait.

He explains this to his coaches. Jones appreciates the open communication but the Team Jones coaches as a whole don’t seem to buy it and feels Samman, as well as maybe some of their other guys are tying to dictate who fights who too much, and feel this is more of a “strategy” move from Samman as opposed to him being really injured.

Jones said he feels Bubba McDaniel wins this fight everywhere except in the wrestling category. McDaniel doesn’t appear very concerned about Gastelum at all. Team Jones Assistant Coach Josh Wood says the only way McDaniel can lose is if Gastelum lands a lucky punch and that he’s not ready for McDaniel’s level of experience.

Legendary actor Mickey Rourke pays a visit to Team Sonnen courtesy of Chael. Rourke talks to the team about the struggles he went through and how he overcame and was able to get up and back on track. Rourke was of course also a former pro boxer and said he had two draws on his record and they both came when he had “lady troubles”.

“You gotta say how can I be better today than I was yesterday.” –Mickey Rourke

Round 2 – Between round Jones tells McDaniel to use his boxing and not to wait for Gastelum. Big leg kick Gastelum. Front kick McDaniel. Spinning kicks from both guys. Clinch, knee from Gastelum. McDaniel goes for a judo throw and falls down, Gastelum takes top position, goes for a guillotine. He loses it and now McDaniel has top control in half guard. The leg kick left a huge mark on McDaniel’s leg. McDaniel takes Gastelum’s back as he makes his way to his feet, Gastelum shakes him off and takes top control. Sonnen told him between rounds, and is yelling now not to give up position. But he does and it allows McDaniel to get to his knees. Gastelum takes his back and goes for the choke with both hooks in, it’s deep, you can see in McDaniel’s eyes he’s caught and done. He taps. Wow! No one was giving Gastelum much of a shot here. Remember, Jones picked who they thought was Sonnen’s “weakest link” — his words exactly.

Coach Sonnen calls it the best fight yet. Jones said Gastelum came out with great movement and footwork, something they weren’t expecting from him. Sonnen said Gastelum maintained position better in round two.

McDaniel said he could never establish his punch. He said he feels like crying — Coach Jones tells him to do what he needs to do — and he does. Jones reminds McDaniel is still available for the wildcard spot. McDaniel said he said he can’t stand losing to Gastelum and feels like a failure.

Ronda Rousey calls after the win, congratulates Gastelum, promises to come out to train with the guys and genuinely seemed excited that he won.

Sonnen says this fight could very well be the main event and the reason it’s happening next is because “no one is willing to fight either one” and the guys are intimidated by both of them. Samman says he feels Troeng has a lot of the same skill set as himself but probably with less explosiveness and athleticism.