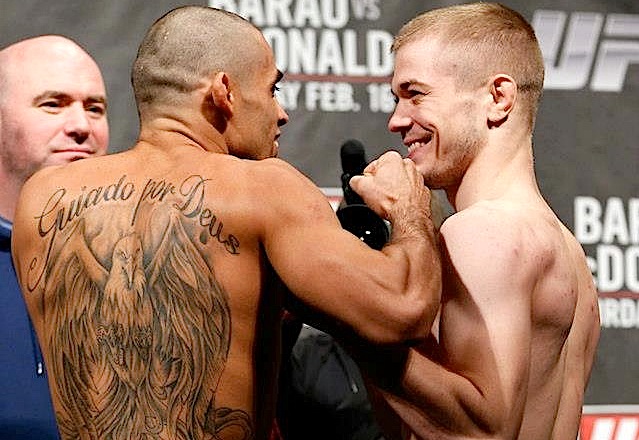 UFC interim bantamweight champion Renan Barao successfully defended his title on Saturday with a fourth round submission win over Michael McDonald in the UFC on FUEL TV 7 main event that took place on London.

Barao wished current UFC bantamweight champion Dominick Cruz a speedy recovery and wants to face him next according to his post-fight interview.

It looks like UFC President Dana White also hopes those plans are able to come to fruition as he communicated those thoughts during a UFC on FUEL TV 7 post-fight media scrum:

Cruz last defended his title in October 2011 when he defeated Demetrious Johnson via unanimous decision. Cruz became the WEC champion in March 2010 with a TKO win over Brian Bowles, and Cruz was promoted to UFC bantamweight champion after the WEC/UFC merger. Cruz has defended the title twice since then, but has been out of action for nearly a year and a half due to an ACL injury suffered during training.

Barao was crowned the UFC interim bantamweight champion when he defeated Urijah Faber at UFC 149 in July 2012. Barao has won 30 consecutive fights and will be a tremendous test for Cruz coming off the major injury and long layoff.

It looks like we’ll get to see who truly is the number one bantamweight in the world in a few months provided everything goes well Cruz’s injury rehab.