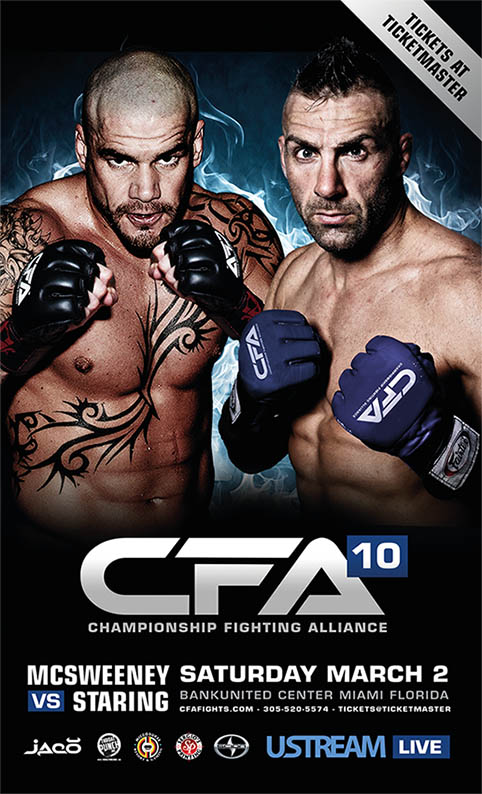 CFA started 2013 with a Night of Champions, crowning four title champions, which included a 25 second first round knockout of Valdir “BBMonster” Araujo (11-4; 3-1 CFA) by Marcelo “Grilo” Alfaya (15-6; 2-0 CFA). “We aren’t one of these puppet MMA organizations,” said Jorge de la Noval, CEO of CFA. “We don’t have easy fights. We don’t offer these guys bums to help them build up their career. If you want to fight for CFA you better be ready to come and bang.” Come and bang they will. Both James “The Hammer” McSweeney and Dion “The Soldier” Staring are looking to prove themselves after suffering losses. “I expect this to be an extremely engaging fight,” said de la Noval. “A win for either of them could launch their career again and put them back on the map.”

The Co-Main Event will kick-off the CFA WMMA Tournament, the first women’s mixed martial arts tournament in Florida that will end in one fighter taking home $20,000.00. “CFA’s slogan is ‘we build champions’ and we want to bring that to the women,” indicated de la Noval. “We have been on a global search for the next big female in MMA and we are confident the winner of this tournament will defend the title proudly.”

The featherweight WMMA tournament line up will feature:

CFA10 will also include jam packed fights between:

The Main Event fight will face off the UFC and Strikeforce veterans. McSweeney is coming off a loss in October at the hands of Matti Makela via TKO in the second round. A former UFC fighter who competed on the Ultimate Fighter reality show, McSweeney was recently in the news when he stopped a knife wielding thief in Las Vegas, NV. Staring was last defeated by Daniel Cormier in the Strikeforce final show via TKO in the second round. A southpaw fighter, Staring trained alongside Alistair Overeem at the Dutch power house Golden Glory and recently moved to train with him again at the Blackzilians in Boca Raton, FL

“CFA launches UFC fighters and are hope is to relaunch the careers of these two amazing fighters,” said de la Noval.

The $20,000.00 WMMA tournament will start off with Co-Main event Stratford versus De Santis. Stratford has an incredible amateur record of 9-1, touting a single loss against the infamous Ronda Rousey. Considered one of the top female fighters to watch in MMA she will be a force to be reckoned with for pro debuter Kelsey De Santis. Undefeated as an amateur, De Santis last fought in October 2011 defeating Stacy Sneeringer via KO in the first round at 2:51. De Santis made headlines when the then Corporal asked music artist and actor Justin Timberlake to the Marine Corps ball on YouTube. He in turn invited her to the 2012 Guy’s Choice Awards and the two have remained in contact since.

Ashlee Evans-Smith and Tori Adams have faced each other previously. Adams defeated Evans-Smith via submission in the second round at 1:26. Evans-Smith, who fights out of California and has a 5-4 amateur record, was a four-time All-American in wrestling while in college. She won the 140-pound belt from Tuff-n-Uff and was also a tri-state champion in California, Washington, and Oregon from 2002-05. In the past, she has trained with UFC fighter Mark Munoz and currently trains at Sub fighter MMA with Coach Adam Lynn. Tori Adams fights out of Colorado Springs, Colorado and trains at Rough House MMA & Fitness. She last fought Raquel Pennington and defeated her via unanimous decision in June 2012. In her amateur career, she won three fights with one no contest.

Peggy “The Daywalker” Morgan who trains out of Triumph MMA and fights out of Manchester, New Hampshire was undefeated as an amateur. In her last fight, she defeated Kaline Medeiros via unanimous decision. Morgan, who started combat sports at 19-years-old, is a New England Golden Glove Champion and won second place at U.S.A. boxing nationals. Revelina “Nana” Berto comes from a fighting family. Her father Dieuseul Berto fought for the UFC and all over the world. Her brother also is an MMA fighter and her other brother Andre Berto is a HBO 2-time WBC champ and IBF champ in boxing. Berto’s sister has been successful in jiu-jitsu competition. She is undefeated with her last victory coming in February of 2009 against Bellator veteran and American Top Team’s Stefanie Guimaraes via decision.

The undefeated Fallon Fox brings a ton of accolades to the tourney. She is 1-0 as a pro and 1-0 as an amateur. Fox was the APFC Women’s Lightweight Champion and Rumble on the River Champion in 2012. She is a 5 time NAGA champion, 2x C3 submission champion, and Gfight champion in 2010. She won 3rd place at the Mundial World Championships, 2nd place at the Pan Jiu Jitsu championships as a medium heavy purple belt and 3rd place the Pan Jiu Jitsu Championships in the open weight division. Michigan’s Allanna Jones trains out of American Muscle MMA and is looking to bounce back from a loss against Randa Markos Thomas in November. Jones was defeated by arm bar in the third round at 3:14. Her first victory came in September when she defeated Kathleen Albany via TKO in the first round. In her amateur MMA career, she went 6-2.

CFA 10 will take place at 6 PM on Saturday, March 2, 2013 at the Bank United Center, 1245 Dauer Drive, Coral Gables, FL. Tickets start at $25.00 and can be purchased at www.ticketmaster.com or at www.cfafights.com. For VIP table seating please contact the CFA offices at (305) 520-5574. Follow CFA on Facebook @ChampionshipFightingAlliance(CFA) or on Twitter @cfafights.

Championship Fighting Alliance (CFA) is S. Florida’s premier mixed martial arts promotion. With corporate offices located in Miami Lakes, FL, CFA produces quality sports entertainment shows providing up-and-coming mixed martial artists an avenue to showcase their talents. The company has paved the way for several MMA talents who have gone on to brand themselves as household names, including Mike Rio, Yoilsandy Izquierdo, and Abel Trujillo. CFA’s shows have produced heart stopping main events like Luis “Baboon” Palomino vs. Gesias Souza and John Howard vs. Dennis Olson . The company has a broad audience in both the US and Hispanic markets with Latin American broadcasting and live televised fights on internet pay-per-view via www.cfafights.com.