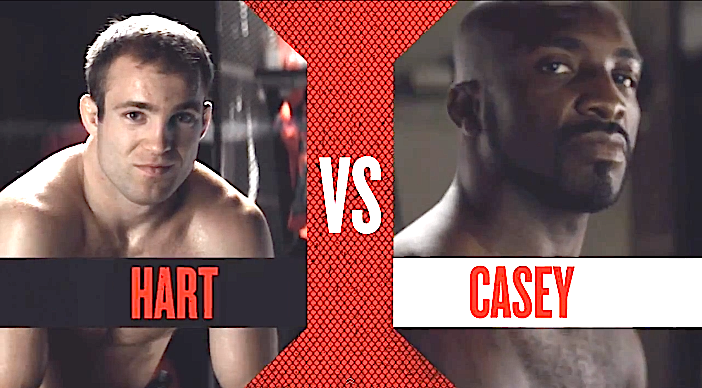 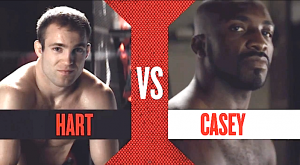 The episode opens with Adam Cella talking about the vicious knockout he received at the foot of Uriah Hall in episode 3. He congratulates Hall on the kick and Hall tells him he’s glad he’s alright.

Next we see Kevin Casey talking to his teammates about the cut he received over his eye in his first fight to get in the house and explaining why he chose to face Collin Hart next. Casey said he thought Hart, who is primarily a grappler, was a good style match-up, as a striker would be more likely to re-open his cut.

Some members of Team Jones are sitting outside questioning how Hart should approach the fight with Casey. Bubba McDaniel, who called out Casey in the last episode, certainly has an opinion on this and tells Hart to impose his will on Casey.

Hart says he’s a quiet guy and some of the people in the house read him wrong. He said he likes to be the “silent type who sneaks past everyone all the way to the top.” Coach Jon Jones thinks the Hart vs. Caey is a good match-up for his team. He says Hart is one of the better ground fighters in the house and says he has “amazing dirty boxing” and is “one of the best cardio athletes” they have as well.

He tells Hart, “You beat this guy everywhere. You really do. That’s why I’m so excited about this match-up.”

Hart said he used to get beat up everyday at recess by a few kids and that it made him stronger. As he grew older he got in a lot of fights, was suspended a lot and did not foresee a bright future for himself. He played football two years in high school and wrestled his senior year, but never thought he would become a pro athlete.

Hart said he had his first fight at 18 or 19 and got a quick knockout. Jones is expecting Casey’s muscles to cause him to gas in this fight.

Casey’s teammates are sitting around the dinner table discussing his rap career. Casey walks in, said he heard his name, and Gilbert Smith busts out in a friendly mock rap and freestyle. Casey fires back with his own freestyle and has everyone cracking up. Another teammate tries his hand at it but chokes up.

Casey said he started martial arts at eight or nine-years-old and become good friends with Rockson Gracie. When Casey was in junior college Rockson passed away and it really hit him hard and drove him to want to succeed in MMA as a representative of the Gracie name.

Coach Chael Sonnen says Casey and Hart’s games are pretty similar but Hart is good at controlling who is on top and who is on bottom once it goes to the ground and “has some pretty high level wrestling skills”. Sonnen talks with Casey about the proper mindset he should take into the fight and told him not to think about protecting the cut on his eye.

Casey said he has nothing personal against Hart but he’s standing in the way of his dream and will break his arm if he has to.

Bubba McDaniel said he was told by his coaches he’s up next if Hart gets the win so he’s excited about that. He’s worried about his weight though, as he’s trying to keep it within range so the cut is not too much.

The power goes out in the middle of the night and Team Sonnen goes upstairs to play a prank on Team Jones. The prank consisted of throwing rolls of toilet paper at the guys while they were sleeping. A couple guys woke up pissed — not much of a prank to be honest.

Josh Samman says Casey and the whole Team Sonnen is going to be surprised at Hart’s skill and says he would bet his house and any amount of money that he’s going to beat Casey.

Zak Cummings says there are very few guys in the house at Casey’s level of grappling and as long as he doesn’t get clipped and have his cut opened up, he should take the fight. He thinks Hart will take him down and try to make it a ground fight which he says “is the dumbest move” to do if you’re going to fight Casey.

Casey also weighs in at 186 pounds.

During the face off Hart flips Casey off. Casey doesn’t say anything but gets right in his face and presses his forehead against Hart. This causes Casey’s teammates to grumble and question why Hart would do that. Uriah Hall said one saw that coming and asks Casey if he can take his place in the fight.

Hall tells Hart he’s disappointed in him. Hart says he meant no disrespect to the rest of the team but he did it because they messed with his sleep the other night. Casey said he’s not upset about the finger, but that it doesn’t look professional.

He says Hart is his own man and still has to get in the cage with him. He also feels Hart is a young guy (22) and this could be a case where he as an older guy (31) is going to teach a young cat a lesson. Hart said he wanted to make a point it’s not okay to mess with his sleep and he’s going to hurt Casey in front of his team.

Hart said it was hard watching two of his teammates get knocked out and he’s glad he’s the one picked to turn it around. Coach Jones seems quite confident in his fighter. Hart also seems confident.

Casey said he has one motto in the cage, “No retreat, no surrender” — which just so happens to be the name of that rap music video he did with Hills star Spencer Pratt.

Round 1 – Hart runs out and slams Casey right away, lands in side control. Casey recovers full guard quickly. Body shots from Hart. Casey trying to make something happen, holding his head in guillotine position. Hart moves to half guard, lands body shots. Casey gets to his feet with 3 minutes to go. Clinch, knee to body from Hart. Knee from Casey to the thigh. Clinch against the cage, Hart moves him to the center, knee to body, presses Casey to cage. Casey turns him around. Trade knees, Hart pushes Casey to the other wall of the cage. He lands a short left, knee to body. Casey with a knee, body shot. One minute to go. Big knee to body from Hart. Again. Elbow from Casey. Sonnen wants more work from Casey. Hart with underhooks, they separate and Casey fires off a few punches prior to clinching back up. Hart lands a little dirty boxing before the bell. Not much real action in the round but I’d probably give it to Hart for the big slam and control, body shots and knees. PMN has it 10-9 for Hart.

Round 2 – One two from Casey, then a big left on the chin and a right before clinching. Knee from Hart to the body, pressing Casey to the cage. Casey bleeding. Jones tells Hart he’s doing great and winning. Hart with a body lock, goes for the trip and gets Casey on his back. Jones tells him to finish him. Hart on top in half guard, lands some punches to the head. Hart passes to side control, then tries to mount but Casey gets half guard. Shoulder strikes from Hart. Jones wants him to cover his mouth. Elbows from Hart, then body shots. Sonnen tells Casey to work. He gets full guard. Many fights would be stood up by now but not here. Hart seems content to  do just enough not to get stood up and not lose position. Caey throws his legs up once to look for something but not to be done. Casey gets up breathing very hard. Jones tells Hart even if there’s another round Casey is defeated. PMN has it 10-9 and 20-18 for Hart.

Sonnen said Hart did a great job and Casey just waited for Hart to let him back in the game which he never did. Jones said Casey tired, which they expected, and it looked like he expected to be the better grappler which wasn’t the case.

UFC President Dana White said even when Casey started landing punches, he had him up against the cage then just stopped and re-clinched. He said it almost looked like Hart broke him, like Casey quit and didn’t even try. “Kevin Casey never showed up to fight,” said Sonnen.

Hart said he doesn’t even consider it a win and hates letting it go to the judges. There’s a significan cut on Casey’s forehead. Casey said Hart was strong and never really gave him any openings. He also said he was hoping to gas Hart out, which didn’t work. Casey said he hopes to get a wildcard, but just didn’t feel physically there.

Team Jones now gets the pick for the next fight. Jones picks Bubba McDaniel to fight Kelvin Gastelum of Team Sonnen. Jones admits Gastelum is the better wrestler but says McDaniel is the better grappler. Sonnen says Kelvin is the youngest fighter in the history of TUF at 21. He calls it a tough fight but believes Kelvin will surprise everyone.