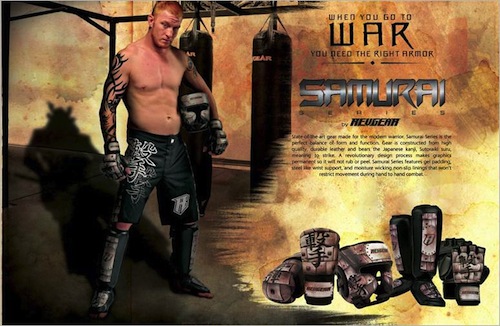 Van Nuys, California (USA): Top combat sports gear maker Revgear is proud to announce that the recently released “Samurai Series,” which is garnering universally solid reviews, is now available to everyone through some of the top fight retailers in the world. A 30-day exclusive with www.mmawarehouse.com recently expired, and as a result, “Samurai Series” is being sold through respected outlets such as www.carnaldammage.com, OTM Fight Shop, and Las Vegas Fight Shop, among others.

UFC fighters including Ed Herman, Manny Gamburyan, and Pat Barry have been training with “Samurai Series” gear, and the consensus is overwhelmingly positive.

“These are the nicest shorts I’ve ever fought in!” exclaimed UFC heavyweight Pat Barry. “Normally, I have a hard time finding shorts that fit and make me feel like I won’t rip them. I hope Revgear keeps sponsoring me, because I only want to fight in these shorts!”

Conceptualized by Revgear founder Paul Reavlin, “Samurai Series” is quite unique. “To my knowledge it’s the only equipment in the world made the way that it is,” explains Reavlin. “The graphics will withstand the punishment without being affected, and each product has certain innovations.

“These items are the highest quality products we produce. So customers can be sure they are getting tremendous value for their money. This is quality that can’t be found in local sporting goods stores.”

“Samurai Series” is another example of Revgear’s commitment to raising the bar in the technology being used to make products in the combat sports equipment marketplace.

Inspired by the ancient combatants of centuries past, Revgear created the “Samurai Series” to provide modern armor for the modern warrior. In keeping with the tradition of the ancient Japanese Gusoku, the “Samurai Series” is the perfect balance of form and function. The artwork and patterns are modeled after actual samurai armor, mimicking the leather, steel, and iron plates displayed on the ancient gear. With the Tekkō MMA Gloves, the Kote Boxing Gloves, the Suneate Shin Guards, the Happuri Head Gear, and the Haidate Fight Shorts that make up Revgear’s “Samurai Series,” modern warriors everywhere can gain the edge needed in today’s evolving combat sports world.

The “Samurai Series” bears Japanese symbols with a sleek armor design. It involves a revolutionary design process that makes the graphic permanent so it will not rub or peel. The line also features gel padding, steel-like wrist support, and moisture wicking non-slip linings that won’t restrict movement during hand-to-hand combat. As a result, athletes can look cool while training with top quality gear.
Constructed of high-quality, durable leather, the “Samurai Series” is comprised of:

· Tekkō MMA Gloves – The Softech™ Leather the Tekkō gloves are constructed out of gives them a “worn-in” feel, so there is no need to break them in. The glove mirrors its ancient predecessor, in that its function was to cover and protect the back of the hand while leaving the palm open for solid grip during hand-to-hand combat.

· Kote Boxing Gloves – Just like with the Tekkō MMA Gloves, there’s no need to treat or break-in the leather with its Softech™ Leather. The Kote was the sleeve portion of Gusoku Japanese armor, and was meant to protect the wrist and arm close to the hand. With its design, the “Samurai Series” Kote is a modern day version of steel and leather sleeve armor.
· Suneate Shin Guards – The guards have a pre-curved contour profile, so there’s no need to break them in, while a metatarsal pad provides solid foot coverage to prevent bruising and injury. With that pre-curved profile, the Samurai Suneate protects the shin much like traditional steel and rawhide greaves did.

· Happuri Head Gear – Interior lining holds the head gear in place while sparring, and the Formfit™ cheek protection features a wide-eye area for maximum peripheral vision. With that level of peripheral vision, athletes can stare down any opposing warrior while wearing the Happuri, which often represented scary demons and ferocious beasts intended for psychological intimidation in the times of the ancient samurai.

· Haidate Fight Shorts – With these fight shorts, high kicks and full range of leg movement are easily achieved with 360-degree stretch fabric. In similar fashion, the Haidate was the portion of Gusoku armor known as the thigh guard, which was made of steel and rawhide, and hung from the waist like a pair of shorts covering the thighs without restricting movement.

For more information on Revgear and the Samurai Series, please visit www.revgear.com. Revgear can also be found on Facebook at www.facebook.com/RevgearMMA, and on Twitter @Revgear.

About Revgear
Founded in 1996 by Paul Reavlin, Revgear continues to be the leading innovator of martial arts equipment. The company strives continually to manufacture equipment that meets the training needs of athletes and competitors all over the world. Cutting-edge technology and innovation behind Revgear products is devoted specifically to combat various challenges associated with martial arts, boxing, and fitness training.