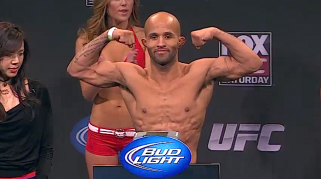 A TUF Finale event will finally host a UFC championship fight. UFC flyweight champion Demetrious Johnson will look to defend his title against John Moraga in the main event of the TUF 17 Finale on April 13 in Las Vegas.

Johnson (17-2-1) is fresh off his title defense against John Dodson on the UFC on FOX 6 in January. It was his first defense since defeating Joseph Benavidez for the inaugural title. The fight got rave reviews and peaked at over 5 million viewers during the broadcast.

Moraga (13-1) is riding a seven fight winning streak, including two UFC wins since Aug. 2012. Moraga’s lone loss came against aforementioned John Dodson via unanimous decision in 2010. He has notable wins over Ulysses Gomez and Chris Caraiso.

We reported earlier today that Miesha Tate will be making her UFC debut at this event, as well as a heavyweight fight between Gabriel Gonzaga and Travis Browne.