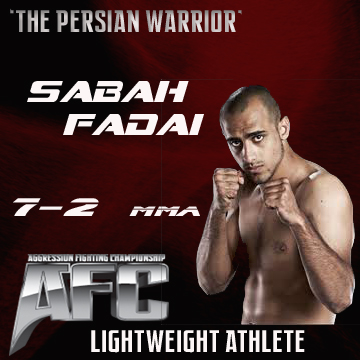 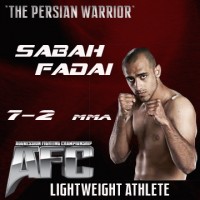 One of Canada’s top lightweight prospects Sabah Fadai trains under the tutelage of Canadian MMA pioneer Kultar Gill at Mamba Martial Arts Academy in Abbotsford BC. He has amassed a 7-2 pro record with all wins coming by either TKO or submission and has proven to be an exciting fighter with a very bright future ahead of himself.

Fadai has fought over seas in the Philippines and in Singapore where he captured their Super Fight Title. His next foreseeable fights will take place in Canada where Fadai will look to climb the AFC lightweight ranks in hopes for a shot at the title currently held by Shane “Shaolin” Campbell 8-1.

His first step in that journey will come March 23 in Edmonton Alberta as Fadai steps in the cage and standing across him will be former AFC champ Stephen “Big Bad” Beaumont 6-1.

What can the fans expect from you March 23? “Well I still haven’t had the chance to showcase my skills but March 23rd I’ll make sure to do so. I’m here to make a noise. Watch for my name and keep a close look out for my team Mamba MMA, we are coming strong.”

AFC promoter Darren Owen had this to say about the signing, “We are always trying to find the best up and coming talent and there’s no doubt that Sabah is one of the best young fighters in our country. He has a big future ahead of him. He’s the type of fighter we love working with. He wants tough fights, he wants to test himself against the best and the AFC makes the most sense as we have the deepest lightweight roster in Canada.”