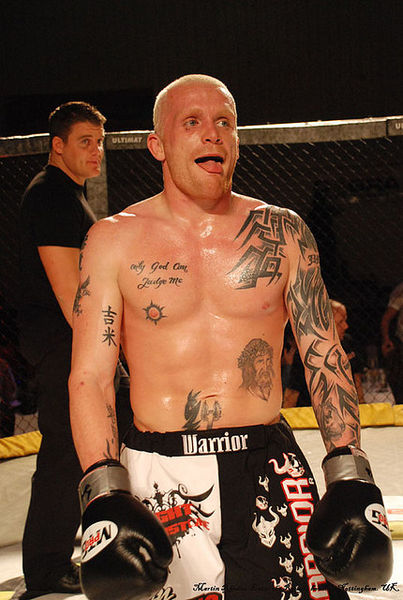 (January 8th.13) The UK’s premier Mixed Martial Arts promotion, BAMMA, is proud to announce that Jimmy Wallhead has signed to a 4 fight deal with BAMMA that is exclusive in the UK.

“Judo” Jimmy Wallhead walks into the BAMMA 12 cage, to face Matt Veach, with an extended fight record of 23-7-0. Regarded among the elite of UK fighters, the Rough House athlete has endured a long road to recognition, through the Welterweight and Middleweight divisions. Rejected for a role in “Ultimate Fighter: United States vs. United Kingdom” in 2008 on the grounds of being ‘too experienced’; Wallhead has been frequently avoided in his career on the grounds of his exceptional talent.

Jimmy Wallhead first appeared at BAMMA to defeat the legendary Frank Trigg at BAMMA 7. He returned at BAMMA 8 to cut down Joey Villasenor with flying knees and a spectacular KO. With one bout at Bellator in between, Wallhead’s clash with Matt Veach on BAMMA 12 will see him work to stake out his claim in the Welterweight division.

“I’m happy to be signing a deal with BAMMA. It’s where I want to be putting on exciting fights for the UK fans. I will also be hunting for that world title for sure!”

“I’m very pleased to have Judo Jim signing for BAMMA. He’s achieved some of his biggest wins on this show and he thoroughly enjoys being part of BAMMA. We’re looking forward to a successful, but also busy year with one of the best shows in the world. Jimmy’s certainly looking forward to regaining some momentum and being seen back on British TV again after what feels like a very slow and difficult couple of years for his career. Anyone stepping up to fight Jimmy this year on his home turf better be ready because I’m confident we’re going to see the best “Judo Jim” any of us have ever seen!”

“Jimmy is considered by many to be the UK’s number 1 Welterweight and has brought some of the most exciting fights to happen in the BAMMA cage. We’re proud to welcome Judo Jimmy to our ranks and I can’t wait to see him continue on his roll at BAMMA 12.”

BAMMA 12 will feature on Channel 5 and 5* in the UK; and will be televised on AXS-TV in the US, The Fight Network in Canada, Red Media in Russia, TV Esporte Interativo in Brazil and Setanta in Africa.

WITH MORE FIGHTS TO BE ANNOUNCED