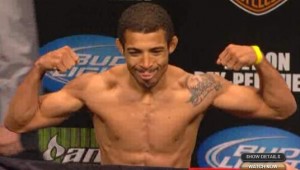 The UFC 156: Aldo vs. Edgar fight card will take place on Saturday in Las Vegas at the Mandalay Bay Events Center. It’s a stacked card with nine ranked fighters on the main card.

The lone un-ranked fighter is Antonio Rogerio Nogueira who isn’t ranked anymore basically because of inactivity. It should be a great card, so I’m provide a quick synopsis for our fans that like to win money. Check it:

This should be a great fight and there are several factors that could ultimately influence the outcome of this fight. Will the year long layoff affect Aldo if this fight goes into the later rounds. Will his timing and ability to gauge range be off? Did the injuries he sustained over the past year affect his training?

The same goes for Edgar though. Will the cut down to 145 pounds affect him at all? He will not have the usual huge advantage in speed and agility that he did against most lightweight fighters.

I think Edgar has about a 40% chance of winning this fight. If he can avoid getting taken out early in the fight he might be able to steal the last three rounds, but he’d have to fight a perfect fight similar to the way Cain Velasquez did against Junior dos Santos. Aldo has incredible takedown defense and is arguable the best finisher in the game when he gets his opponents hurt. I think the damage that Edgar has taken over the past couple of years will start to become a factor in his fights as well. I think he’ll fight valiantly, but I think Aldo will be too much here.

Both fighters are coming off long layoffs, but Nogueira has been out longer. Nogueria could be dangerous early because of his striking skills, and he has shown the ability to finish opponents with strikes. He’s also very good on the ground. Evans does a great job of striking and transitioning into takedowns. Nogueira is incredibly difficult to put away and has only been stopped once via TKO in his career. It was pretty much a fluke KO as well against Sokoudjou. I think the ability of Evans to win the scrambles and control where the fight takes place wins this one for him.

A battle of two massive heavyweights. Overeem has the advantage standing and Silva’s chin is somewhat suspect. Silva has a puncher’s chance standing, but a great opportunity to win if he can somehow get Overeem down and obtain top position. I think that’s pretty unlikely, and Overeem should finish Silva via TKO.

This fight is very difficult to predict. You know exactly what Fitch is going to do, and he’s incredibly tough to stop. Maia has improved leaps and bounds with his striking, and we know how dangerous he is on the ground. Fitch has been almost impossible to submit in his UFC career. Will he keep the fight standing where the fight will be somewhat even, or will he take a chance and go with his grinding style on the ground the way he normally does. Has Fitch been in a fight with someone as decorated on the ground as Maia? No. However, Maia has gone against guys not as skilled on the ground as Fitch and not been able to submit them. I think Fitch take it via decision as he normally does.

This could be fight of the night. Ian McCall did an interview with us and stated that he has had a lot of personal problems in this camp. That’s never a good thing when going against an opponent like Benavidez. Benavidez should be able to win the scrambles as I think he’s a bit quicker than McCall. The pressure and pace that Benavidez probably gets him the decision win in this one.