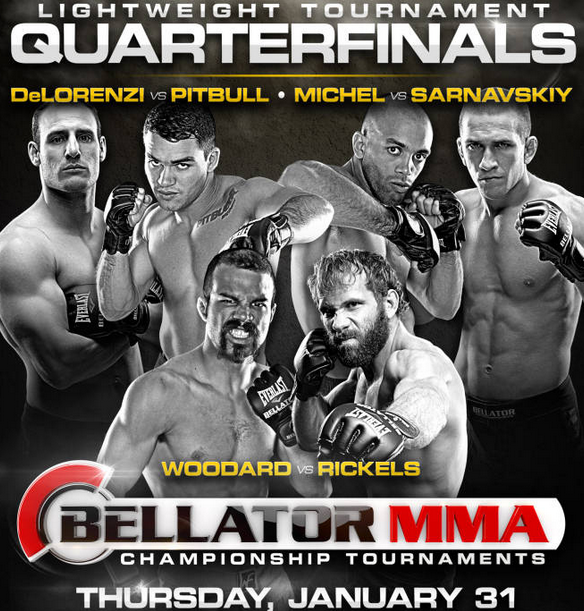 Round 2 – Front kick Michel. Right hand, body kick from Michel. Tiger shoots, gets the double leg takedown. Michel gets to his knees, then his feet. Tiger grabs a single, lets it go. Goes for a double leg and puts Michel on his butt. Michel fighting to get up, gets to his knees. Tiger goes for his back, has both hooks in now and looking for the choke. 1:30 to go. Tiget gets the choke locked in and Michel taps out.

NOTE: Be sure to check out our exclusive pre-fight video interview with Tiger Sarnavskiy!

Round 1 – Touch gloves. Leg kick from DeLorenzi, Awad gives one back on the outside, then inside. They swing big in the pocket, Awad connects with a huge right and DeLorenzi is stunned, Awad follows up with a couple lefts and DeLorenzi crumples to the canvas. The ref steps in to save him and this fight is over.

Ricardo Tirloni vs. Will Brooks

Round 1 – Right hand from Brooks. Leg kick inside. Inside again. Again. Body kick.Another inside leg kick. Tirloni shoots. Brooks hops around the cage on one leg before getting put down. Brooks gets to a knee and his feet, takes a knee to the body, then puts Tirloni on his back. Brooks inside ful guard, he postures up, lands some solid punches. Tirloni locks on a triangle. Brooks breaks free, lands a few punches from inside guard. PMN has it 10-9 Brooks.

Round 2 – Jab from Brooks, inside leg kick. Body kick. He shoots, carries him across the cage and puts him down. Works from inside guard, postures up with big punches. Dives in with a punch. Lets Tirloni up and they exchange shots. Brooks shoots and Tirloni locks him up in a guillotine as it hits the ground. Brooks tries to pass guard, Tirloni goes for a leg, Brooks stands up and Tirloni follows. Leg kick from Brooks. Body kick. Left to the body and head from Tirloni. Brooks shoots, stuffed, and Tirloni gives him a knee to the groin. Time is called. Body kick Brooks. 30 seconds to go. Inside leg kick from Brooks. Snappy jab. Tirloni drags him down but Brooks pops up before the bell. PMN has it 10-9 Brooks.

Round 3 – Inside leg kick Brooks. Jab. Front kick Tirloni, clinch, knee, body jab. Nice one two from Brooks, nice footwork too. He gets the takedown, lands in half guard.  Butterfly guard from Tirloni. Brooks working from half guard with 2 minutes to go. Brooks postures up , Tirloni gets up, lands a big body shot. Brooks shoots, dropping levels, stuffed. Thai clinch and knees from Tirloni, one two punch. They square up. Jab from Tirloni. Brooks shoots and puts him down. Inside guard and Tirloni throws up a triangle with 30 seconds left. Brooks escapes danger and finishes the round inside guard. PMN has it 10-9 and 30-27 Brooks.

Round 1 – Wow. They got some pretty horrible promos leading into this. Rickels dressed up as a caveman and Woodard  saying a bunch of goofy stuff. Leg kick Woodard. Body kick, slips, up and they clinch. Woodard gets a body lock from behind, one hook in. Knee to the back of the thigh of Rickels. Belly to back suplex from Woodard. Takes Rickels back, both hooks in now at the 3:30 mark. Rickels escapes and gets full guard. Woodard postures up with punches. Rickels throws up for a triangle. Woodard picks him up for a big slam, still caught in the triangle but gets free. Rickels with butterfly guard. Now closed guard, throws up an armbar. Woodard gets out, scramble. Rickels goes for a heel hook, Woodard gets free. Woodard goes for his own footlock. Rickels gets out, lands some punches, Woodard’s nose bleeding now. Woodard goes for another foot lock. Rickels gets out, drags Woodard by his feet, dives in with a punch. PMN has it 10-9 Woodard.

Round 2 – Leg kick Rickels, lands some punches. Woodard looking tired here. Swings misses, eats a left counter from Rickels. Body kick from Rickels, lands a one two. Left counter. Leg kick. Rickels shoots, stuffed. Clinch, Rickels backs out. Rickels being aggressive with punches, lands a body combo. Body jab from Woodard. He lands a left to the chin catching Rickels coming in with a kick and knocks him down. Rickels throws up an armbar. Woodard escapes. Rickels gets to his feet, clinched, knee from Rickels. Knee from Woodard, not much on it. Rickels with a big right, then a body shot and a knee. Woodard puts him down. 30 seconds to go. Woodard postures up, eats an upkick, now inside full guard.. PMN has it 10-9 Woodard.

Rickels will face Tiger Sarnavskiy in the semifinals.  Will Brooks will face Saad Awad.