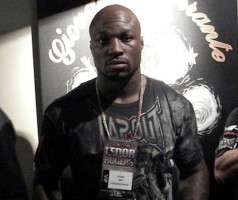 Bellator MMA welterweight champion Ben Askren finally finished an opponent impressively, and King Mo Lawal did what was expect against Przemyslaw Mysiala to win via first round KO at Bellator 86. Askren used his wrestling prowess to take Karl Amoussou down and inflict some devastating ground and pound en route to a TKO win via doctor stoppage.

Amoussou was game in that he was in survival mode for much of the fight, and many opponents more than likely would have folded by giving up position for Askren to apply a submission. However, he fought until the doctor’s were forced to stop the fight after his left eye was basically closed prior to the start of the fourth round.

King Mo Lawal used a nice jab against a fairly aggressive opponent in Mysiala before landing a huge right hand that put him down for good. Lawal was the heavy betting favorite going into the fight, and it was thought he would win impressively in his Bellator MMA debut.

Douglas Lima took out Michail Tsarev via TKO (leg kicks) in the second round. The first round saw both fighters fighting tentatively until Lima landed a few leg kicks near the end of the first round. The kicks appeared to take their toll as Lima began to attack the same leg in the second round with Tsarev going down for a second time in the fight. He was unable to support his own body weight which forced the referee to call the contest. Lima has only suffered one loss since 2009, a unanimous decision loss to Bellator welterweight champion Ben Askren which is a span of 12 fights.

MMA veteran Ben Saunders defeated Koffi Adzitso via unanimous decision (30-27) on all the judges scorecards. Both fighters traded early takedowns in the first round, but it was Saunders who began to impose his will with strikes in the second round. The third round saw Saunders take Adzitso down and land some ground and pound from the top position to take the fight. Saunders will now advance to the Bellator welterweight tournament semifinal.

The Bellator 86 preliminary results are below: