Jessica Eye on her submission win over Zoila Gurgel: ‘It was the greatest moment of my life’ 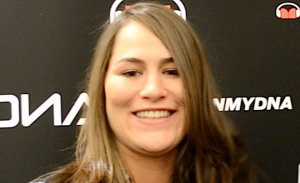 Speaking with ProMMAnow.com (www.prommanow.com), Jessica explained what the win meant to her:

“It was the greatest moment of my life. I feel like people finally gave me the respect that I deserve after I got that. And I think that people think that I didn’t have a submission game, so it kind of shut them up. Zoila kind of fell right into it too, and the height advantage that I had over her really made it a lot easier for me to get it.”

As far as what’s next for the “Evil” one, she confirmed her next fight will be inside the Bellator cage in April. And if you want to know who she’s fighting, follow her on Twitter at @JessicaEvilEye so you’ll be among the first to find out when she makes the announcement.

Be sure to check out more exclusive ProMMAnow.com interviews from on-scene at Bellator 85.