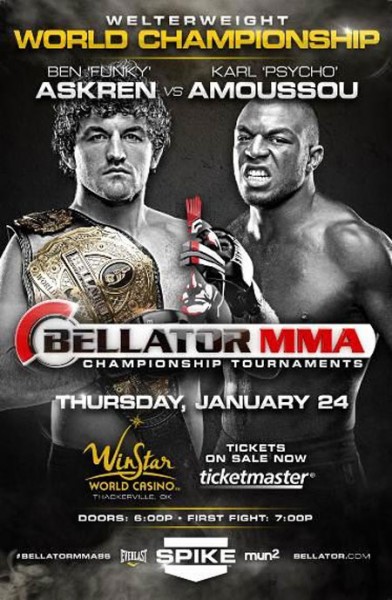 Bellator 86 takes place this evening from the WinStar World Casino in Thackerville, Okla. Ben Askren puts his welterweight title on the line against Karl “Psycho” Amoussou. In addition to the title fight there are five tournament bouts on the card including the Bellator debut of  King Mo.

Round 2 – Body kick Marius. Leg kick Weedman. Left hand snaps Marius’ head back. He circles looking for range. Straight right from Weedman, knee to the body. High kick Marius, one two punch. Weedman lands a right and Marius retreats. Nice left and right from Weedman. Left hook from Weedman. Clinch, knee from Weedman, drops levels and tries to get Marius down, goes for the back, now looking for an armbar. Marius pulls out and stands up. Marius does a backflip and lands in a reverse mount! WTF? However, Weedman scrambles free and takes his back with a figure four leg lock. Both hooks in now as he looks for the choke with under a minute to go. Back to the figure four leg lock squeezing Marius’ waist. PMN sees it 10-9 Weedman.

Round 3 -Touch gloves. Leg kick Marius, Weedman returns one. Weedman shoots and Marius lands an illegal knee to the head. Ref warns him and Marius gives him one more illegal knee to the head. Time is called and the doctor checks Weedman out. Weedman says he’s okay. One point deduction for Zaromskis. Marius shoots, stuffed, eats a knee or two. Leg kick Weedman, right hand. Head kick Weedman. Spinning backfist from Zaromskis lands behind the head as Weedman shoots. That was hard! Weedman grabs the single as Zaromskis sprawls. Punches from Zaromskis as Weedman pulls guard. 2:30 to go. Ref stands them up. Leg kick Zaromskis. Rolling kick from Zaromskis connects on the head of Weedman. Weedman shoots and Zaromskis ends up on top inside full guard. One minute to go. Ref stands them up with 30 seconds to go. Two head kicks from Zaromskis, both blocked. PMN sees it 9-9 after the point deduction.

Round 1 – Left from Adzitso, he shoots. Stuffed, Saunders presses him to the cage. Adzitso gets Saunders down but Sanders has him locked up looking for an armbar. Adzitso gets free momentarily but Saunders locks up his neck with a triangle position. Adzitso with big body shots. Saunders working on an arm but still taking body shots. Ref wants action. Adzitso working from inside full guard, a high guard. Ref stands them up. Clinch, knee from Saunders to the body, takes Adzitso down, on top inside full guard landing body shots. 30 seconds to go. Ref wants more action, stands them up. Nice knee from Saunders catches Adzitso coming in. Adzitso ties him up to the cage. PMN sees it 10-9 Saunders.

Round 2 -Thai plum and knees from Saunders. A right hand and Adzitso goes down. Saunders takes top position with punches as Adzitso has full closed guard. Saunders postures up with punches. Ref stands them up. Body kick from Saunders, and they exchange some shots before Adzitso goes for a single. Saunders defends, but Adzitso turns the pike and puts him down. Saunders attempts an omoplata, Adzitso on top in Saunder’s  full guard now. 1:30 to go. Ref stands them up due to inaction. Haymaker from Adzitso lands on the arm. He shoots for a single. Elbows to the ribs from Saunders. Adzitso working hard for it. Saunders pulls the switch and gets advantage, lands several knees to the body. PMN sees it 10-9 Saunders.

Round 3 – Adzitso shoots in right away, pulls guard and takes punches from Saunders inside his full guard. Body shots from Killa B. Adzitso doing little more than hanging on, pure defensive posture. Ben stacks him with a couple big right hands that don’t connect fully. He lays back inside guard, half guard, and delivers a couple left hands. Adzitso makes his way to his feet, body lock, pulls for a suplex but Saunders literally lands on his face in teabag position… ouch, ooch, eek! Saunders takes the full mount, stretches him out with 30 seconds left and stays busy with less than powerful punches. Ben looks for an armbar with 10 seconds left but time is up. PMN sees it 10-9 and 30-27 for Killa B.

Round 1 – Leg kick Lima. Left straight from Lima, leg kick Tsarev, he shoots. Sprawl from Lima. Tsarev holding a single against the cage. Lima softening him up with rabbit punches. Tsarev lifts the single leg, still working for it. Lima defending, body shot, hammerfist to the head. Tsarev drops down for a leglock attempt but ends up on bottom with Lima inside his full guard, closed. Ref wants action. Tsarev holding on and gets the standup. Leg kick Lima. Straight right from Lima, leg kick. High kick from Tsarev. Low kick from Tsarev connects. Again, push kick from Lima and a leg kick to follow that buckles Tsarev, he has to be helped to his corner. PMN sees it 10-9 Lima.

Round 2 – Jab, and an enormous leg kick to the same left front leg of Tsarev — he immediately goes down. Ref lets him up. Another big leg kick from Lima, Tsarev wings  a big right hand, one more leg kick from Lima and Tsarev goes down. Tsarev doesn’t speak English by the way but he appears to want to continue when the ref asks him. Lima kicks his downed opponent a few times then lets him up. Another leg kick to the hobbling one-legged Tsarev and this fight is over folks, the ref calls it. Amazing performance from Douglas Lima. It’s amazing Tsarev even came out for round two to be honest.

Round 1 – Two fighters making their Bellator debut here. King Mo calls his opponent “Cole Slaw” because he — and most everyone else in America — can’t pronounce his name. It’s been over a year since Mo has fought. He’s been through a lot with staph infections, an ungodly amount of surgeries, the whole TNA wrestling thing and there’s a lot of expectation and pressure here for Mo to perform. Big one two from Mysiala. Left from Mysiala connects, high kick. Mo starting slow, body jab. Mysiala with a windmill right. Mo throws a combo, slips off balance a little. Mo catches a leg kick, delivers a right. Stiff left jab from Mo, it opens up Mysiala’s nose. Nice head movement from Mo, ducks a punch. Low kick from Mysiala. Mo stalking with punches. It’s a boxing match right now. Jab from Mo and Mysiala’s nose is busted into a bloody mess. Mo working that jab looking very good. Staying calm and precise. Left from Mysiala. Jab from Mo. One two connects. Left jab, then a right hook puts Mysiala on the canvas and it’s over folks. The ref steps in. Mo’s time spent working with Jeff Mayweather has paid off obviously. He looks like a different fighter. Proud of this guy.

[box type=”shadow” ]Check out our video interview with Mo and his boxing coach Jeff Mayweather from last week when he talked to us about the evolution of his striking and a couple of possible opponents he would be interested in fighting and who he would like inside the boxing ring! Here’s our VIDEO INTERVIEW WITH KING MO.[/box]

Round 1 – One two from Karl right away, lands a right. Ben shoots, stuffed, eats a right hook from Amoussou. Amoussou throws a front kick and gets put on his back just 30 seconds in. Amoussou with full guard, punches off his back. Askren throws an elbow. Amoussou with a straight armbar, Askren breaks out, one hand choke and punches Amoussou. Elbow. Stacks Amoussou, one hand choke, tries to punch Amoussou but misses. Amoussou punches him off his back and lands nicely on the chin. Askren staying busy with punches but Amoussou is fighting hard with his own strikes. Askren postures up. Amoussou shrimping. Askren opens Amoussou up with an elbow. Amoussou looks for an armbar but Askren gets free and continues to stay busy. Under a minute to go. Askren with more elbows and punches and the round ends with Amoussou cut and bleeding on the bottom. Domination. PMN sees it 10-9 Askren.

Round 2 – Uppercut from Amoussou as Ben chases. One two from Karl. Right from Ben. Ben shoots, ends up on the bottom looking for an armbar. Karl goes for a heel hook, Amoussou was talking to the ref telling him it’s popping or something. Ben stays calm, they roll and Ben ends up on top landing the ground and pound on his bloody opponent. It’s a red faucet now. That was a tight heel hook and a rare shot for Amoussou to submit Askren but he may have blown it by talking to the ref trying to apparently tell him to stop it. Askren staying busy inside full guard, big hammerfists. Blood in the eyes of Amoussou. Askren gets to full mount momentarily. Big punches landing from Askren, he’s beating the will out of Amoussou. One minute to go. Askren predicted a second round TKO and he’s on his way to making it happen. He pours it on and Amoussou looks like he went out for a second but got woke back up… I could be wrong. Ref lets it go and Amoussou is pure defense. Barely covering up. PMN sees it 10-8 Askren. He’s like a Matt Hughes 3.0 in this fight.

Round 3 – Nice uppercut from Amoussou. Ben shoots, Amoussou sprawls but Ben is right back on top inside half guard and delivering punishment, picking up where he left off in round two. Askren postures up with several punches as Amoussou tries to stifle the assault by holding on. Elbows from Askren, big right hands, hammerfists. Amoussou with one elbow from his back, that’s all he’s done and it may have been accidental. Amoussou tries to make something happen, throwing his knees up but Ben moves to side mount, now full mount. 30 seconds to go. Ref tells him he has to move. Askren can’t get the finish though and Amoussou survives. PMN sees it 10-8 Askren.

Doctor checks Amoussou out closely between rounds, shining a pen light in his eyes.. They are discussing it… They stop it. Karl does not look disappointed. He’s not arguing.

[box type=”shadow” ]Have you seen all our video interviews from last week’s Bellator event? We got interviews with guys like Don “The Dragon” Wilson, Shane Mosley, King Mo, Bjorn Rebney, Pat Curran and many other Bellator and on-Bellator fighters. We also still have more coming with guys like Tito Ortiz and others, so trust me when I say… stay close to Pro MMA Now (www.prommanow.com). Please hook up with us too on Facebook at Facebook.com/ProMMAnow cause we want to be your friend![/box]