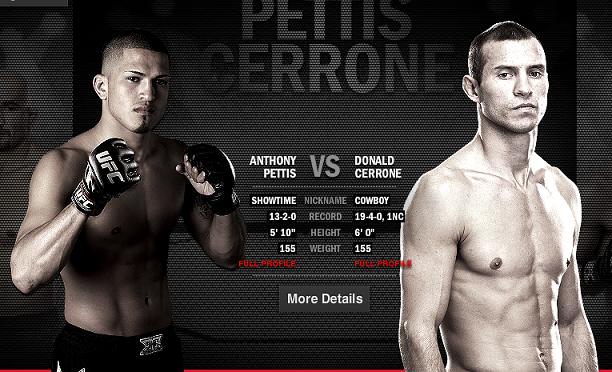 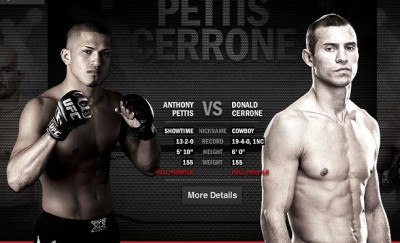 The UFC on FOX 6 main card will feature a lightweight bout between former WEC lightweight champion Anthony Pettis and top ten lightweight Donald Cerrone. Pettis has been close to a title shot in the past and a win over someone like Cerrone is exactly what he needs to solidify his case. This fight has some bad blood brewing so let’s see how it breaks down.

Pettis (15-2) is coming off the highlight reel KO win over Joe Lauzon in his last outing at UFC 144 in February 2012. Pettis has won back-to-back fights since losing his UFC debut against Clay Guida. He has won six fights via TKO/KO and six fights via submission, and has never been finished in an MMA fight.

Cerrone (19-4, 1NC) is coming off a KO win over Melvin Guillard in his last outing at UFC 150. Cerrone has also won back-to-back fights after suffering a loss to Nate Diaz at UFC 141. Cerrone has won two fights via TKO/KO and 13 fights via submission. The only time he was finished in an MMA bout was when the current UFC lightweight champ Ben Henderson submitted him when they were both in the WEC promotion. In fact, two of his four losses have come against Ben Henderson.

This fight has been building up for a while now with both fighters calling each other out. Both fighters are dynamic on the feet and on the ground. Both have great chins and the winner of this fight will be all about who executes their gameplan the best.

According to Fightmetric, Cerrone is the more accurate striker while Pettis is more difficult to hit. Pettis is more successful in getting his opponents to the mat and also has slightly better takedown defense. Both fighters have a common opponents in Jeremy Stephens and Ben Henderson. Pettis took a close split decision win while Cerrone beat him up pretty good. Both fighters fought Ben Henderson a while back with Pettis taking a close unanimous decision win and Cerrone lost twice against Henderson as I mentioned earlier.

This fight is basically a pick’em fight according to the odds makers.

Cerrone has been the more active fighter lately as Pettis hasn’t fought in almost a year which gives the edge to Cerrone. Cerrone will have a slight reach advantage in this fight. Pettis is probably the more dynamic striker as he will mix kicks and punches from all types of angles while Cerrone relies a little more on kicks to get the job done. However, Cerrone has shown increasing power in his punches the last couple of times out. The only two TKO/KO wins in his career have taken place within the last year and a half.

I expect Cerrone to attack with leg kicks which could make him vulnerable to takedowns. Cerrone also tends to allow fighters to set the pace early on in his fights which could be problematic. Cerrone is quite capable of fighting on pure emotion which basically negates whatever gameplan he planned to use in his fights. The bad blood between these two could be a factor there.

I think Pettis has better striking and I think he can take Cerrone down if he needs to. The only reservation I have with him in this fight is the long layoff. Cerrone is tough as nails and has a fairly active guard game while on his back which could make things interesting.

I think Pettis wins this fight via unanimous decision, but would not be surprised to see Cerrone take the fight via decision as well.