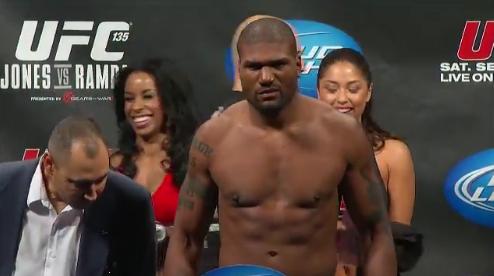 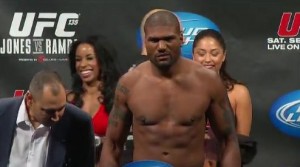 He has a career record of (32-10) with 14 of those wins coming via TKO/KO. It should be 17 wins via TKO/KO since he has three wins credited as submissions, but the submission were due to either strikes or injury to his opponents.

Jackson has been labeled as a KO artist and rightfully so as he burst onto the UFC scene with a knockout win over Marvin Eastman at UFC 67. He then knocked out Chuck Liddell for the second time at UFC 71 to become the UFC light heavyweight champion. He suffered a controversial loss his next fight against Forrest Griffin at UFC 86, but had Griffin hurt badly with punches a couple of times in that fight. Then he avenged two prior defeats at UFC 92 when he knocked out Wanderlei Silva in December 2008.

That’s the last time Rampage Jackson has knocked out anyone in MMA.

He has fought almost 19 rounds without being able to finish an opponent while relying solely on his striking has his primary weapon of choice. There is no ground and pound attack or the huge slams we were accustomed to seeing in PRIDE. Granted, the opposition he has faced in the UFC is of higher quality for the most part. Let’s not forget his decision wins in PRIDE over fighters like Murilo Rua(he arguably lost that fight), Murilo Bustamante, and Yoon Dong Sik.

So there have been spurts in his career where you would have thought the KO/TKO win would be inevitable only to see him win in lackluster fashion. The reasoning behind some of those performances was the lack of proper training or training partners according to Jackson. Also, PRIDE had a terrible habit of announcing fights at the last minute or switching opponents extremely close to fight time.

So that explains some of his past performances, but what explains the perceived loss of power from Rampage in the past four years?

What could be the explanation for Jackson’s inability to put opponents away the way he used to? It it age or has he become so one dimensional in his approach that his opponents can better prepare for him?

Jackson takes on Glover Teixeira in the co-main event of the UFC on FOX 6 show on Saturday night. Teixeira was finished via TKO in his first professional MMA bout in 2002 and hasnt’ been knocked out since. He has 19 wins and 12 of them have come via TKO/KO. Jackson complains about opponents always wanting to ‘wrassle’ with him and being afraid to stand and strike. He just might get want he’s been asking for on Saturday night, and we’ll see if the power is still there deep inside or if the power source has been turned off for good.

4 thoughts on “Rampage Jackson: Who turned off the ‘power’ source?”