The ProMMAnow.com staff weighs in with their thoughts and predictions on UFC on FX 7 going down Saturday in Sao Paulo, Brazil. Michael Bisping and Vitor Belfort square off in the main event. A win for Bisping should earn him a title shot with Anderson Silva.

DENNY HODGE: The game plan for both guys is simple. Belfort will look to come out quickly and land some of his patented heat to the grill of Bisping early. Bisping will come out and look to avoid the quick start of Belfort and instead, try to take Belfort into deep waters in a long battle of attrition. Belfort will start fast but Bisping’s defensive kickboxing will help him avoid any possible fight-ending exchanges. In later rounds Bisping will land with more frequency as he steps in and out of range. Bisping’s cardio will make the difference in this one as Belfort fades late. Bisping by decision.

JAN GAETJENS:  I’m taking The Count in this one. At this point it’s just hard to see Bisping continually come so, so close to the summit, only to get H-bombed in the dome. Bisping by decision

JAY CEE: I really feel that Vitor poses a major threat in this fight. He is a really good all rounder and brings a lot of experience to the table. Bisping also brings experience and above all confidence, he is hungry for a title shot and seems really focused for this fight. If Bisping can maintain a solid takedown defense, push the pace and work his striking then he should do well. If Vitor is able get comfortable quickly his power punches could spell trouble for Michael. If the fight goes to the ground I think Vitor will have the advantage, so it all depends who can grab early control of their opponent. Bisping has really good cardio, so the longer the fight lasts, the better chance Bisping has of winning. PICK: Michael Bisping wins via Decision.

GARY THOMAS: Vitor Belfort at home is going to be a tough challenge for The Count. Bisbing has a title shot riding on the fight. Belfort is a great challenge but he isn’t at the peak of his game anymore. Can he submit Bisbing or fight through the Brit’s onslaught? Doubtful. I like Bisbing taking out Belfort setting up his ass whipping by Anderson Silva. Pick- Bisbing via TKO.

BRIAN FURBY: Bisping = asshat, so Belfort = winner. Vitor by KO in Round 1.

JACK BRATCHER: Bisping should be able to take this, especially if it goes past the first round. His well-roundedness, conditioning and wrestling should make the difference. Bisping via decision.

DENNY HODGE: Dollaway righted the ship with an underwhelming victory over “Mayhem” after dropping back-to-back bouts in the UFC. Sarafian is making his UFC debut after a stint on TUF: Brazil, and will have to shake off the ring rust in this one to earn his first UFC victory. Look for both guys to look for the takedown to establish control in this bout. Dollaway’s boxing still hasn’t improved much and his wrestling will be key to offset the top control of Sarafian who possesses a dangerous submission game. In the end, Sarafian will get on track, land on top and go to work in the guard of Dollaway before finishing with a sub. Sarafian by submission.

JAN GAETJENS: Dollaway has the clear experience advantage, and Sarafian is still pretty fresh off of injury, but keep an eye on Sarafian; He’s got a lot of upside, and his dynamic striking will no doubt give fans some highlight reel finishes to look forward to as his career takes off. Sarafian by (T)KO

JAY CEE: Sarafian enters the UFC riding a four fight winning streak and brings a solid ground game. If octagon jitters don’t become a factor then Daniel could be a real threat in this fight. Dollaway is coming off a loss in his last fight, where his wrestling earned him a decision victory over Jason Miller. If he can do the same in this fight then he may be able to grind Sarafian down and cancel out any submission attempts. PICK: Dollaway wins via TKO

GARY THOMAS: Dollaway is tough but he has 1 win out of his last 3 over. Daniel is making his UFC debut but the Brazilian hasn’t lost since 2009. I like Dollaway’s wresting but I see him getting submitted. Pick – Sarafian via submission.

BRIAN FURBY: Sarafian by sub (triangle) in Round 1.

JACK BRATCHER: TUF Brazil vet Sarafian makes his official UFC debut here. He made it to the TUF finals but got injured before the bout. I think CB’s wrestling should be enough to counter CB’s Sarafian’s BJJ game. I could be very wrong, and I accept that. Sarafian could very well be a superstar in the making, but I want to see him get through a tough vet like CB first before I jump on the bandwagon. Going with Dollaway via decision.

DENNY HODGE: Both guys are coming off first round finishes in their last outings and both need another impressive performance to gain any type of relevancy in the UFC’s Heavyweight division. Rothwell’s cardio has always been an issue but he appeared to be in better shape in his last bout. That could be deceiving however, considering how fast the fight ended. Gonzaga has been known to slow down as well so this fight could come to a crawl if it limps into the final frame. Rothwell will lands some solid shots on the feet to close the distance and put Gonzaga on the cage, looking to rough him up in close. Look for Gonzaga to use his kicks to keep Rothwell at distance, and then when the fight hits the ground, Gonzaga will do work from the top. Gonzaga will use his top control game to wear down Rothwell until the bell sounds. Gonzaga by decision.

JAN GAETJENS: If Rothwell can land a clean shot to Gonzaga’s already well weathered down chin, it could be a quick, and most likely permanent, trip back to retirement for Gonzaga. Rothwell by (T)KO

JAY CEE: Gonzaga is good with submissions and stand-up, but Rothwell looked great in his last fight against Brendan Schaub, where he earned “Knockout of the Night” honors. Both guys have been inconsistent when it comes to winning fights and with so much talent in the division they will want to prove their worth. This fight provides and opportunity to step up in the division with a good performance. PICK: Ben Rothwell wins via TKO

GARY THOMAS: I love the heavyweight match up. Rothwell is a tough cat who is coming off a huge knockout win. His toughest challenge will be to overcome the homecourt advantage. Gonzaga has that KO power too but I gotta go with Ben pulling the spoiler for sure. Rothwell via KO.

BRIAN FURBY: Been a year since Gonzaga fought, so I’m sure he’s anxious to get back in there. I think he’ll put Rothwell in trouble early, but get sloppy and run right into one of Rothwell’s fists. Rothwell by TKO in Round 1.

JACK BRATCHER: I used to be a big Gonzaga fan but he’s let me down too many times. Rothwell’s heavy hands should find success against Gonzaga’s suspect chin. Rothwell via TKO.

DENNY HODGE: Nurmagomedov has yet to taste defeat with an unblemished record of 18-0 (2-0 UFC). Tavares is a well-rounded veteran coming off a very nice win over Sam Stout, and has shown marked improvement in his striking. Nurmagomedov will push the pace and give Tavares problems in the clinch with his stellar takedown defense. Tavares will score on the feet but will have trouble fighting moving backwards as Nurmagomedov gets on track. Nurmagomedov stays perfect with a unanimous decision victory in this one.

JAN GAETJENS: Going with Numagomedov’s gas tank and, up to now, well thought out gameplan execution. As cliche as it sounds, he fights smart, and that will make the difference. Numagimedov by decision

JAY CEE: Khabib Nurmagomedov is undefeated and dangerous. The 24-year-old entered the UFC after a successful run on the regional circuit in Russia. In his last two fights he traveled into the third round and managed to win, which judging by his record is quite uncharacteristic. He normally ends fights in the first round, but I guess the UFC provides a much tougher challenge. Thiago Tavares is definitely not an easy assignment, he is on a two fight wining streak and brings a high level ground game. PICK: Khabib Nurmagomedov wins via Decision

GARY THOMAS: After making picks for almost two years you think I would learn a thing or two. I have twice picked against the undefeated Russian Nurmagomedov. Not this time. I think both men will come out strong but over the course of three rounds I think Khabib will do enough to secure the judges favor. Not only will he be the more aggressive of the two but it has been just over a year since Tavares has been in the cage. Pick – Nurmagomedov via decision.

BRIAN FURBY: I think anyone live blogging the fights who will type Nurmagomedov throughout the live blog deserves an award. Nurmagomedov by unanimous decision.

JACK BRATCHER: Khabib has a super impressive undefeated 18-0 record. This is his third fight in the UFC. He wore a great t-shirt to the weigh ins Friday about Sambo being better than BJJ. The Russian Sambo master’s well-rounded game should be enough to defeat Tavares. Khabib via TKO. 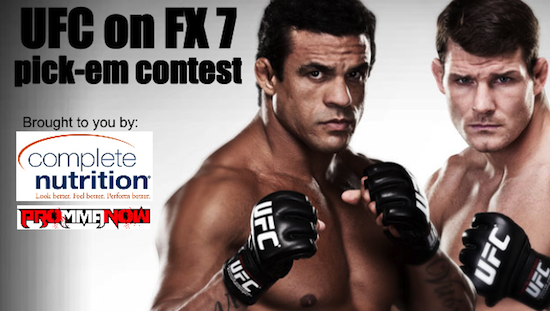