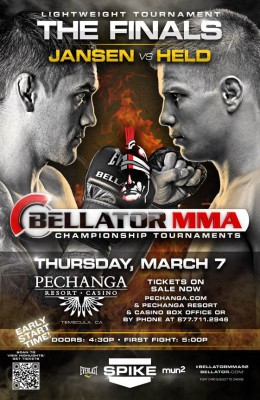 Tickets for the event start at just $40, and can be purchased by visiting Pechanga.com, Bellator.com, or by calling the Pechanga Box Office at 877-711-2946 or visiting between noon and 8pm daily.

The event will broadcast LIVE starting at 7 p.m. PST on Spike TV, as well as in Spanish language on mun2. The preliminary card will be streamed LIVE and FREE on Spike.com starting at 5 p.m. MST.

Only 20 and holding an impressive 15-2 record, polish phenom Marcin Held stormed through the opening rounds of the lightweight tournament, collecting explosive victories over Murad Machaev and longtime MMA veteran Rich Clementi. Known across the MMA landscape as one of the top submission artists in the sport, Held is a victory away from capturing his first Bellator Tournament crown and a guaranteed title shot.

For Jansen, the charismatic lightweight enters the Bellator Finals riding a five fight win streak and is fully prepared for the test that awaits him on March 7th, in what undoubtedly be the biggest fight of his career.

“I’ve had a lot of time to work on my game plan and really focus on this fight on March 7th,” Jansen said. “Marcin has the total package when it comes to submissions, so I know what I need to focus on to win this fight, and get a shot at the Bellator title.”

“Pechanga is a gorgeous venue that will be a tremendous partner for us throughout 2013 as we air live every Thursday night on Spike,” said Bellator Chairman & CEO Bjorn Rebney.

“As the largest tournament-based MMA organization in the world, Bellator MMA offers Pechanga guests the adrenaline-fueled fights they demand,” said Pechanga Development Corporation President Patrick Murphy. “We are very excited to be offering up the highly anticipated Jansen vs. Held fight, as well as a host of action packed fights on March 7th.”

One thought on “Bellator Lightweight Tournament Finals set for March 7”