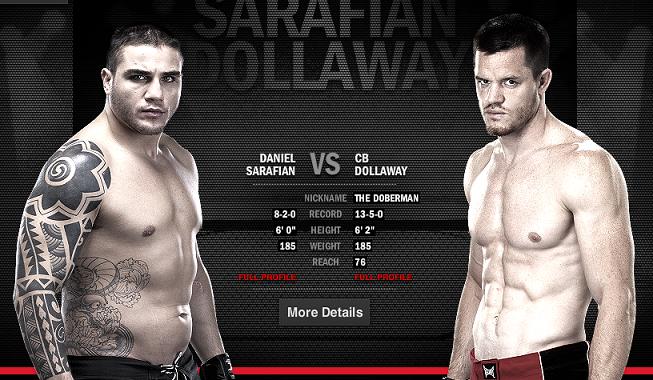 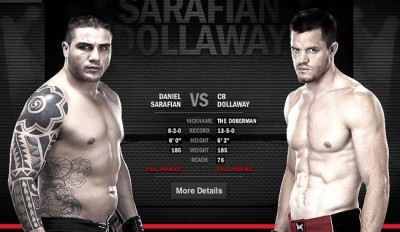 The UFC on FX 7 co-main event will feature a welterweight battle between TUF Brazil’s Daniel Sarafian and TUF 7 finalist C.B. Dollaway. Sarafian was supposed to compete the finals of TUF Brazil, but an injury prevented him from making his UFC debut until now. Let’s see how this one breaks down.

C.B. Dollaway (12-4) took a unanimous decision win over Jason “Mayhem” Miller in his last outing at UFC 146. Dollaway was coming off two consecutive losses going into the bout with Miller, and survived an early to grind out a decision win. Dollaway has won five fights via TKO and three fights via submission in his career. He has been submitted twice and knocked out twice in his four losses.

Daniel Sarafian (7-2) hasn’t had an official bout since a submission win over Ricardo Silva in July 2011. Sarafian won a fight via decision to get into the house on TUF Brazil, then went on to finish two opponents to be eligible to compete in the finals before the injury derailed his journey. He has secured six of his seven wins via submission.

This fight should be a good scrap. Dollaway was an All-American wrestler at Arizona State University and has transitioned his wrestling into MMA pretty well. His striking has improved a bit, but his bread and butter is getting the takedown while maintaining top control as he did in his bout against Miller. Dollaway’s chin is suspect as well, he’s been rocked several times during his fights and knocked out twice.

Sarafian has some striking skills, but as evidence of his record, prefers to take the fight to the ground and submit his opponents. He does have power in his strikes as he displayed that on TUF Brazil.

The two big questions into this bout will be what type of cardio do each of them have, and will Dollaway be able to maintain top control if he’s able to take Sarafian down.

Both fighters are coming off very long layoffs, and cardio will be a factor. We also have to take into account that Sarafian is coming off an injury that required surgery as well.

I think Sarafin will be able to land some strikes as Dollaway tries to close the distance for a takedown. If he’s able to hurt Dollway, look for Sarafian to finish him on the ground via submission. If Sarafian isn’t in shape, look for Dollaway to be able to grind out a decision win.

I’m going with Sarafian in this one via submission.

Be sure to check ProMMAnow (www.prommanow.com) on Friday for the UFC on FX 7 main event breakdown between Vitor Belfort and Michael Bisping.