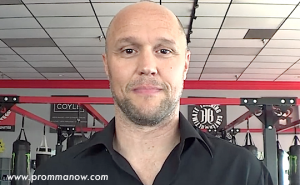 On Tuesday, Bellator CEO Bjorn Rebney took a few minutes to speak with ProMMAnow.com (www.prommanow.com) reporter Dan “The Wolfman” Theodore about the possibility of signing Quinton “Rampage” Jackson, and the potential of a Rampage vs. King Mo match-up inside Bellator, as well as the possibility of Rampage doing a TNA/Bellator deal similar to what King Mo is doing.

Rebney also clarified their stance on the Eddie Alvarez contract dispute as it relates to matching the money the UFC offered him, pointing out that the UFC’s offer did not guarantee Alvarez would fight on Pay-Per-View. Rebney talked about Bellator’s future as it relates to women’s MMA.

He also weighed in on the question if he thought being on Spike is going to create any tension between himself and UFC President Dana White, who up to this point has never really had anything negative to say about him. And if it does heat up between Rebney and BLAF, Wolfman asked him if there’s any chance they could settle it inside the cage. Oh Wolfman…

Stay close for more on scene coverage from Bellator 85.