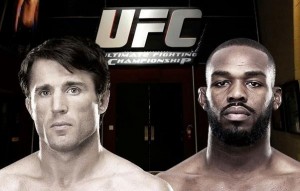 UFC officials have announced that tickets for the upcoming UFC 159: Jones vs. Sonnen event will go on sale January 23.

The event is set to take place on April 27 at the Prudential Center in Newark, New Jersey. Jones and Sonnen have served as coaches on the 17th season of “The Ultimate Fighter” that’s set to air with a two hour special on the FX channel January 22 at 8 p.m. ET.

“Jon Jones has destroyed all the top guys in the light heavyweight division,” UFC President Dana White said. “He has defended the title four times and is one of the pound-for-pound best in the world. This fight with Chael is personal! Chael called Jones out and said a lot of things about him. Chael always comes to fight and I’m very interested in this matchup.”

“There’s a rumor going around that says Jon Jones is the best,” Sonnen said. “We’re going to find out who wins – the best or the baddest?”

“The rumors are true, I am the best,” Jones, who won the title at Prudential Center in March 2011 by defeating then-champion Mauricio “Shogun” Rua, said. “On April 27th, Chael will be put through the test. When it’s all said and done, he’ll be just like the rest.”

Jon Jones defeated Vitor Belfort at UFC 152 in his last outing and will be looking to tie former champion Tito Ortiz with a fifth consecutive title defense in the UFC light heavyweight division. Chael Sonnen is coming off a TKO loss to pound for pound king Anderson Silva at UFC 148, and will be returning to the light heavyweight division for the first time since 2005.