• Bas Rutten, MMA legend and Inside MMA host on AXStv, underwent neck surgery this morning, seems to be doing well and is now in recovery. 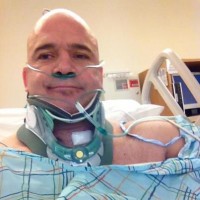 “They will fuse three discs together in my neck which will make space for my nerves that are caught right now, and then hopefully I will get my strength back!” -Bas Rutten via Facebook

• UFC lightweight Jami Varner is also on the injury report due to some torn ligaments in his thumb he incurred during his win over Melvin Guillard at UFC 155. Varner may have a surgery to look forward to if things don’t heal correctly. 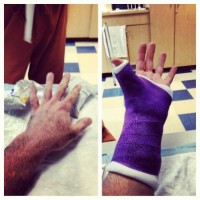 “Worst news possible tore both ligaments in my thumb in a cast for 4 weeks. And if they aren’t healing correctly have to get surgery! Ugh” -Varner via Instagram

• MiddleEasy’s @LayzieTheSavage has a rapid fire video interview with Dana White that is definitely worth checking out. White discusses Bellator and the Eddie Alvarez contract situation, Leslie Smith’s wardrobe malfunction at Invicta FC 4, rumors that Zuffa is interested in purchasing Invicta FC, fans that make highlight reels using UFC-owned video content, the UFC’s new deal with Monster, Gilbert Melendez’s UFC title shot, Josh Barnett and other Strikeforce fighters potential move to the UFC, White’s upcoming surgery and what to expect in 2013 for FOX and the UFC.

Quote of the interview is:

• Check out this video of two of the UFC’s hottest stars, Ronda Rousey and Jon Jones, facing off and playing around at the World MMA Awards.

• Reports are surfacing that the target date for Gilbert Melendez’s UFC debut against champ Ben Henderson for the lightweight title will be April 20 at UFC on FOX 7 in San Jose.

• If there was any question about the quality of match-ups on that Strikeforce finale card, and if “you get what you pay for” means anything in MMA, take a look at the discrepancies in some of these paydays — most particularly Barnett’s $250,000 compared to Guelmino’s $12,000 and Cormier’s $120,000 compared to Staring’s $8,000. Here’s the complete Strikeforce finale reported payroll:

• At the age of 36 and with a career record of 16-5, Javier Vazquz, a third-degree BJJ black belt and  husband of Rose Gracie, announced his retirement Sunday night on Sherdog’s “Rewind” show:

Vazquez has been fighting professionally since 1998 and was part of the WEC before making the move to the UFC. Vazquez finally made his long-awaited UFC debut in April 2011, winning a unanimous decision against Joe Stevenson. It’s refreshing to see a fighter go out on a win, especially in the UFC, after spending more than a decade fighting on the smaller shows.

• Looks like KJ Noons is headed to the UFC despite his controversial split decision loss to Ryan Couture on the Strikeforce finale.

• Everyone’s favorite action star/front kick inventor, Steven Seagal, drops the news to MMAWeekly’s @RyanMckinnell that he may be sharing his deadly secrets with Strikeforce heavyweight champ Daniel Cormier as he gets ready to transition to the UFC… Awww sh*t! Lookout Jonny Bones!

• McKinnell also caught up with “Fighter of the Year” Jon Jones at the 2012 World MMA Awards and Jones dished on the year that was 2012 for him, the ups and downs both personally and professionally: