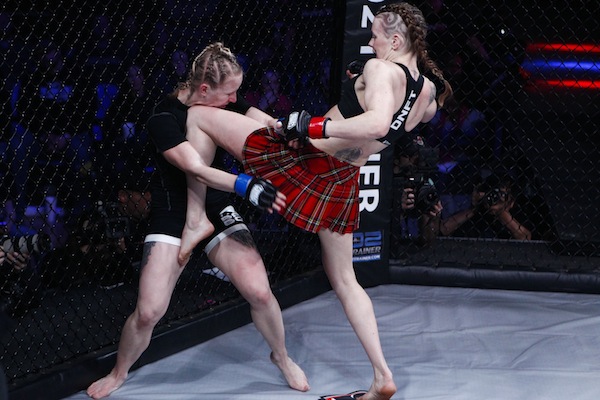 Scottish fighter Joanne Calderwood (5-0) is one of the most promising and entertaining flyweight talents in women’s MMA today. Many people will agree that Jo Jo’s recent bout against Livia von Plettenberg at Invicta FC 4, which took place January 5 in Kansas City, was a strong contender for “fight of the night”.

During the bout she pushed the pace and pressed forward for three rounds. Her aggressive style really got the fans going and by the end she clearly had gas still left in the tank. Pro MMA Now (www.prommanow.com) reporter Jay Cee recently caught up with Joanne to discuss returning home to Scotland, Invicta FC 4, training and those vicious elbows!

Pro MMA Now: Hi Joanne, great to have you on ProMMANow.com. How are you doing? It must feel nice to be back at home after your trip to Kansas City?

Joanne Calderwood: Hi all, yea it’s great being home catching up with my teammates and family. It felt like I had been away longer this time just with people being  busy and off with the Christmas period. On the downfall, I’ve took this whole week to fight jet lag and I’m hoping by next week it’s away.

Pro MMA Now: Congratulations on your victory at Invicta FC 4 on Jan. 5. You picked up an impressive unanimous decision win over Livia von Plettenberg. How does it feel to get your fifth straight win?

Joanne Calderwood: It always feels awesome winning especially when performing well. I’m happy that I got to showcase my Muay Thai in front of a big audience.

Pro MMA Now: You guys really went to war, you were hitting Livia with some really good shots, but she just kept going. Was she tougher then you expected and were you disappointed to not get the finish?

Joanne Calderwood: I knew Livia would have been tough and used to taking shots as she has had a lot of kickboxing fights. I was disappointed after the fight, but after watching it back I can see that Livia was in survival mode for rounds two and three, and with someone being on the back foot it’s really hard to land your shots as they aren’t taking all the power going back. I’ve done three 5-minute rounds no problem and showed I could go another three.

Pro MMA Now: I noticed during the fight that you incorporated some really nice elbows into your striking. Is this something you work on a lot in training?

Joanne Calderwood: I love elbows out of all the limbs this is my favorite  I have had a lot of A-class fights in Thai and always looking to cut or stop an opponent and elbows just happen to do that. I’m always throwing them even when I’m walking past someone (in the gym that is). I don’t think elbows are used enough in MMA.

Pro MMA Now: We hear a lot about how well Invicta FC treats their fighters, from the moment they arrive, to the moment they leave. Tell me a bit about your experiences with Invicta and what it is like to participate in an event?

Joanne Calderwood: Everything you have heard is true. Invicta treats the fighters brilliantly. I was a fan of the show when I saw their first event. I love what Shannon and Janet are doing giving female fighters a platform to perform on.

Pro MMA Now: You have fought for the promotion twice now, and things are clearly going well. Have you ever considered leaving Scotland and relocating to the U.S. to live and train?

Joanne Calderwood: No, I could never leave my team. I truly believe that I am where I am because of them. After my last fight there have been people asking me to come over and train with them, which I think is awesome and I’d definitely be up for that experience, but for my own fight camps I will be doing them at the DNFT. One of the factors in my success is the fact I’m surrounded by professional flyweight and bantamweight fighters.

Pro MMA Now: You have a really aggressive fighting style that really appeals to fans and spectators. Would you attribute this to your background in Muay Thai or do you personally prefer to fight that way?

Joanne Calderwood: I’m actually completely different in my Thai fights, I’m more relaxed and tend to counter fight and I only go forward aggressively when I hurt my opponent.  I’m lucky enough to change up the way I fight, which makes it harder for my opponents to prepare for me. I’ve tried not to fight the same way twice in five MMA fights, so opponents can’t predict my style too much.

Pro MMA Now: Coming off two victories fighting for Invicta FC, is there anyone in particular that you would like to fight next?

Joanne Calderwood: I don’t have anyone in particular, I want to fight anyone ranked higher than me. I want the Invicta belt at my weight, I’ll fight whoever Invicta puts in front of me to get there.

Pro MMA Now: Have you already returned to training with the “Dinky Ninjas” or are you taking some time out to rest and recover?

Joanne Calderwood: I fought Saturday, arrived home Monday and  I was back in the gym Tuesday, I have been training light and eating anything with sugar in it lol. I’m hoping to have a fight confirmed for February, so I will be picking things back up on Monday.

Joanne Calderwood: To keep winning and getting better, fight and compete in as many competitions as possible. Fight a spider monkey.

Pro MMA Now: Thanks for taking the time to speak with us Jo Jo, we appreciate it. Good luck for the future and I look forward to your next fight!