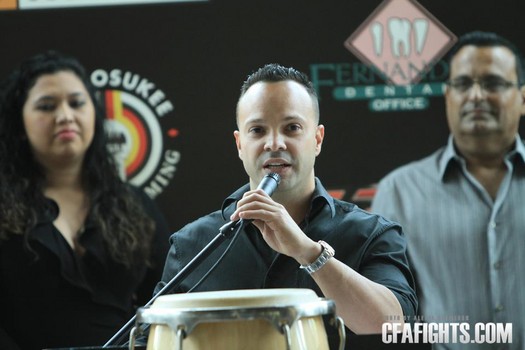 “There are no easy fights in the Championship Fighting Alliance (CFA),” said CEO, Jorge De La Noval. The promotion, which earned the 2012 Florida MMA Awards’ “Best Promotion”, seeks to continue that success this year.

“It’s great to see all the hard work you put together and all the money you invested gets rewarded,” said Noval about the Florida MMA Awards recognition. “It puts us at a different level now. Fighters are actually signing multi-fight deals with us now because now they believe in the company,” he continued.

The determined promoter has always been involved in martial arts, but it wasn’t until his first jiu jitsu sparring session, and opening Miami’s first American Top Team (ATT) gym that he became passionate about MMA. “It kinda’ grew on me from there,” explained Noval. “I got that virus and I decided to take the sport to the next level. I decided to start promoting Mixed Martial Arts.”

In 2008, the 26-year-old entrepreneur held his first event, which he exclaimed, “I lost my ass!” But he also called it his university. “I learned a lot from the event, and I’ve been doing it ever since, and I don’t plan on stopping,” explained Noval about that experience.

The biggest lesson he’s learned in MMA is that it takes a lot of money because of the constant investment. Noval also understands that along with the growing pains, it takes educating people about the sport. “We can’t give up because this is the biggest sport in the world,” he said.

It is certainly one of the biggest sports in Miami where Noval said fans are spoiled for the best and will pack the house for big PPV cards. And according to him, the state has always been one of the top regions for combat sports that are now all transitioning to MMA. “Everyone wants to be a part of the biggest sport in the world,” he reiterated.

And on the issue of MMA remaining a niche sport because of its violent nature, the vocal CEO feels it is already mainstream like football, boxing and other sports that have more serious injuries in his opinion. “I don’t see any other sports selling PPV the way MMA does,” he commented.

Noval is also excited about the growth of female fighters and says he, his partner and wife have always been a fan of women’s MMA. “They want to prove a point; they want to prove they belong,” he said. “It’s such a beauty to have girls. Now women’s MMA gives them the opportunity to turn pro. This is great for the sport.”

Following the CFA 9 introduction of the ladies will be a 145-pound division tournament held in March that fans and Noval himself are excited about. “I’m sure it will be a great addition to CFA,” he continued. Currently they have six signed female competitors that Noval said fans are dying to see.

And on the CFA ring girls, let’s just take Noval’s word that it gets a little crazy at the office when they’re around.

Fight week for the “Night of Champions” is January 17-19 when fans will have an opportunity to meet fighters, as well as win prizes via smart phone entries. Fight fans can check out the full CFA 9 fight card and event details on Facebook. And to keep up with all CFA news follow them on Twitter at @CFAFIGHTS and Like them on Facebook.