Yves Jabouin vs. Johnny Eduardo added to UFC 158 in Montreal 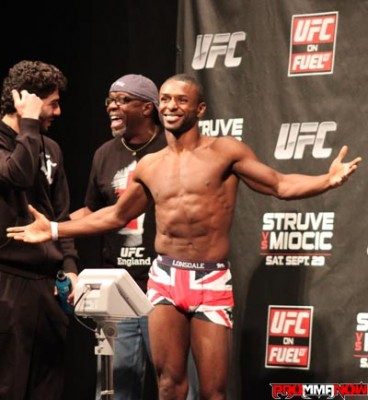 A new fight has been added to the UFC 158 card as Yves Jabouin (18-8) faces Johnny Eduardo (26-9) in a bantamweight matchup. The event will take place at the Bell Centre in Montreal, Canada, on March. 16.

UFC 158 will feature a headline bout between UFC welterweight champion Georges St.Pierre and challenger Nick Diaz. The main card will air LIVE on PPV following prelims on FX and Facebook.

Yves Jabouin last fought at UFC on FUEL TV 5 in September, where he dropped a first round KO loss to Brad Pickett. Prior to that he had been on a three fight winning streak, defeating notable fighters such as Ian Loveland, Walel Watson and Jeff Hougland. Jabouin now has the chance to bounce back into the win column with a big performance on March 16th.

Meanwhile, Eduardo was last in action at UFC on FUEL TV 3 in May, where he scored a unanimous decision victory over Jeff Curran. Prior to that he dropped a unanimous decision loss to Raphael Assunção at UFC 134 in August 2011. That defeat snapped an eleven fight winning streak Johnny had built up fighting on the regional circuit in Brazil. Eduardo will no doubt look to start a new streak with a big win over Jabouin.

Stay close to ProMMANow (www.prommanow.com) for all the latest UFC 158 news and updates.

One thought on “Yves Jabouin vs. Johnny Eduardo added to UFC 158 in Montreal”