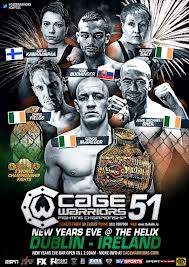 The Helix, in Dublin, Ireland, will host the 12th and final show of Cage Warriors Fighting Championship for the year on New Year’s Eve. 2012 has been the most successful and busy year in their decade long history.

Cage Warriors 51 will be CWFC’s first show in Dublin since Cage Warriors 47 took place in June. It was at Cage Warriors 47 where Conor McGregor beat Dave Hill for the featherweight belt. McGregor, a native of Dublin, has his sights set on securing the currently vacant CWCF 155lbs title.

To accomplish this feat he will have to beat Slovakian Ivan Buchinger. If successful, McGregor will be the first fighter in CWFC history with titles in unified weight classes.

Fellow Dubliner and McGregor’s team-mate, Chris Fields, will also be competing in a title-bout fight, for the first time since his middleweight strap win at CWFC Fight Night 7, against former Strikeforce competitor Jesse Taylor as part of the co-main event.

The main card will be offered free online at MMAJunkie.com at 9pm GMT, followed by the three-bout preliminary card on Facebook at 8pm GMT. Weigh-ins can be checked at the CWFC page Here.