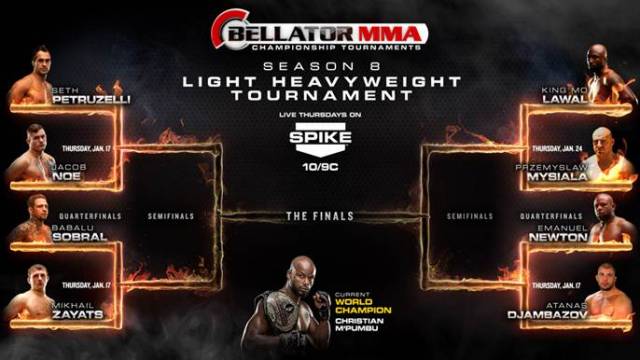 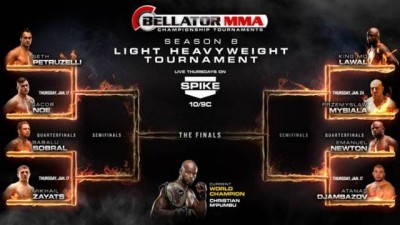 The Bellator MMA promotion has announced its Season 8 Light Heavyweight Tournament Bracket as the promotion gets ready to make its Spike TV debut in 2013. The tournament will take place on January 17th at the Bren Center in California. The January event will be headlined by two title fights. Bellator lightweight champion Michael Chandler will take on challenger Rick Hawn, and Bellator featherweight champion Pat Curran will take on challenger Patricio Pitbull.

The Light Heavyweight Tournament Bracket is below:

The winner of the 12 week tournament will earn a title shot against the current Bellator light heavyweight champion Christian M’Pumbu. The Lawal/Mysiala fight will take place on January 24th at Bellator 86.

“At Bellator, there’s never been a matchmaker sitting behind a desk in a shiny suit deciding who fights who for the title,” said Bellator Chairman & CEO Bjorn Rebney. “The origin of Bellator was to provide a seamless connection between real sports competition and mixed martial arts, and I believe we have taken that to the next level with a true tournament bracket format.”

Be sure to stay tuned to ProMMAnow (www.prommanow.com) for more Bellator news and coverage.