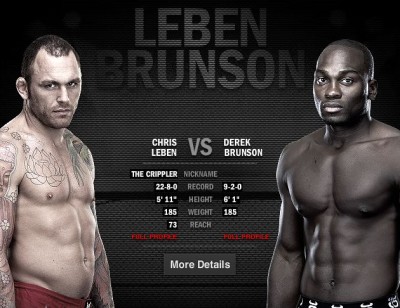 There will be lots of fans looking forward to the return of Chris “The Crippler” Leben (22-8) on Saturday night at UFC 155, where he faces Derek Brunson (9-2) in a middleweight bout. Best known for his aggressive stand-up style, Leben will enter the Octagon after a year away from professional competition.

Following his most recent bout against Mark Munoz at UFC 138, Chris tested positive for Oxycodone and Oxymorphone. As a result of the positive test, Leben was suspended from fighting for one year.

This wasn’t the first time “The Crippler” had been caught using illegal substances, as he had previously received a nine month ban and a fine after testing positive for Stanozolol following a bout with Michael Bisping at UFC 89 back in 2008.

Many people would instinctively think after the failed drug tests and drinking offences outside of the Octagon that Leben would be treading on thin ice with the UFC, but according to various interviews with UFC president Dana White, they still enjoy having him as part of the organization and really respect him as a fighter.

Regardless of his ups and downs inside and out of the cage, Chris still remains a fan favorite, having earned “Knockout of the Night” four times and “Fight of the Night” twice during his UFC tenure. Leben’s encounter with Wanderlei Silva at UFC 132 is one that sticks out in my mind as a real example of what Chris comes out to do, which is go in there, throw bombs and put on an exciting fight. That particular bout lasted only 27 seconds before Leben finished Wanderlei with the KO in sensational fashion.

After losing to Mark Munoz at UFC 138, Chris will now look to get himself back into the win column at UFC 155. The event takes place at the MGM Grand Garden Arena in Las Vegas, on December 29. Leben’s fight with Derek Brunson will feature as the opening bout on the event’s main card, which will air LIVE on PPV starting at 10 p.m. ET.

Derek Brunson is currently on a two fight losing streak, most recently dropping a first round KO loss against Ronaldo Souza at “Strikeforce: Rousey vs. Kaufman” in August. Prior to that he was defeated by Kendall Grove via split decision at ShoFight 20 in June. Brunson’s last win was against Nate James at “Strikeforce Challengers: Britt vs. Sayers” in November 2011, where he scored a unanimous decision victory. Derek will want to make a big impression on the UFC after making the move over from Strikeforce, so I expect him to be on top of his game come Saturday night.

Stay close to ProMMAnow (www.prommanow.com) for all the latest UFC 155 news and coverage.

2 thoughts on “UFC 155: Chris ‘The Crippler’ Leben returns to action after year layoff”